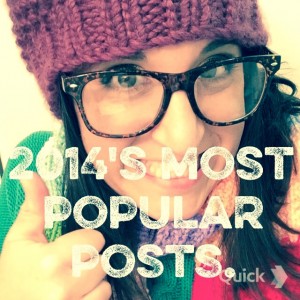 As 2014 nears its end, I’m pumped to thank you, my blog’s fantastic readers, for a fabulous year, and to share a round-up of the blog’s five most popular posts from 2014.

These are the most-clicked posts, the posts you loved or hated, because — for one reason or another — they resonated. Thank you, sincerely, for reading them the first time, and for sharing them.

Here they are, from fifth place to first:

I sat at the foot of the bed with crossed arms and my mind made up while I ugly-cried: “I will never meet another guy who likes me.” I was 20 and mildly dramatic and my path — one I briefly walked with a blue-eyed, black-haired bass player — had been pulled out from under me. Read the rest.

4. The most important thing to do while you’re single.

A stack of save-the-dates and wedding invitations covers a corner of my desk at home. By March 2015, five more of my friends and their significant others will have wed, while I — now nearly 29 — will have not. That I might witness all their vows without a date doesn’t bother me at all as I write this. That doesn’t mean that how single I am has never bothered me. Read the rest.

When Lisa Selin Davis told a cabdriver she was going to have an abortion, he pulled the car over on the Brooklyn Bridge in a blizzard. He begged her not to do it. Davis, then a 22-year-old aspiring filmmaker, had conceived the child with a married man she met at a film shoot. But she “didn’t want that baby, with that man,” she wrote in an essay that printed in the Perspective section of the Tampa Bay Times on Sunday. Read the rest.

“…there was no chorus of angels, no shining light from Heaven” when on her wedding night, (Samantha Pugsley) finally had sex. Instead, she cried in the bathroom afterward. She dreaded sex for the first couple years of her marriage, she wrote, but obliged when her husband — who had no idea she dreaded it — initiated. Read the rest.

1. Why I don’t date men who are ‘willing’ to save sex for marriage.

(My boyfriend) respected my boundary, until he didn’t — until he mocked my decision to save sex and chalked it up to “immaturity,” in effort to manipulate me into changing my mind. He said “no guy will wait that long,” and begged me to break my promise to practice chastity. Instead, I broke up with him. I learned a lot in that relationship, including this: I’d never date a guy again who was only “willing” to save sex. Here’s why: Read the rest.

[callout]Do you blog, too? Share a link to 2014’s most popular post from your site in the combox below.[/callout]