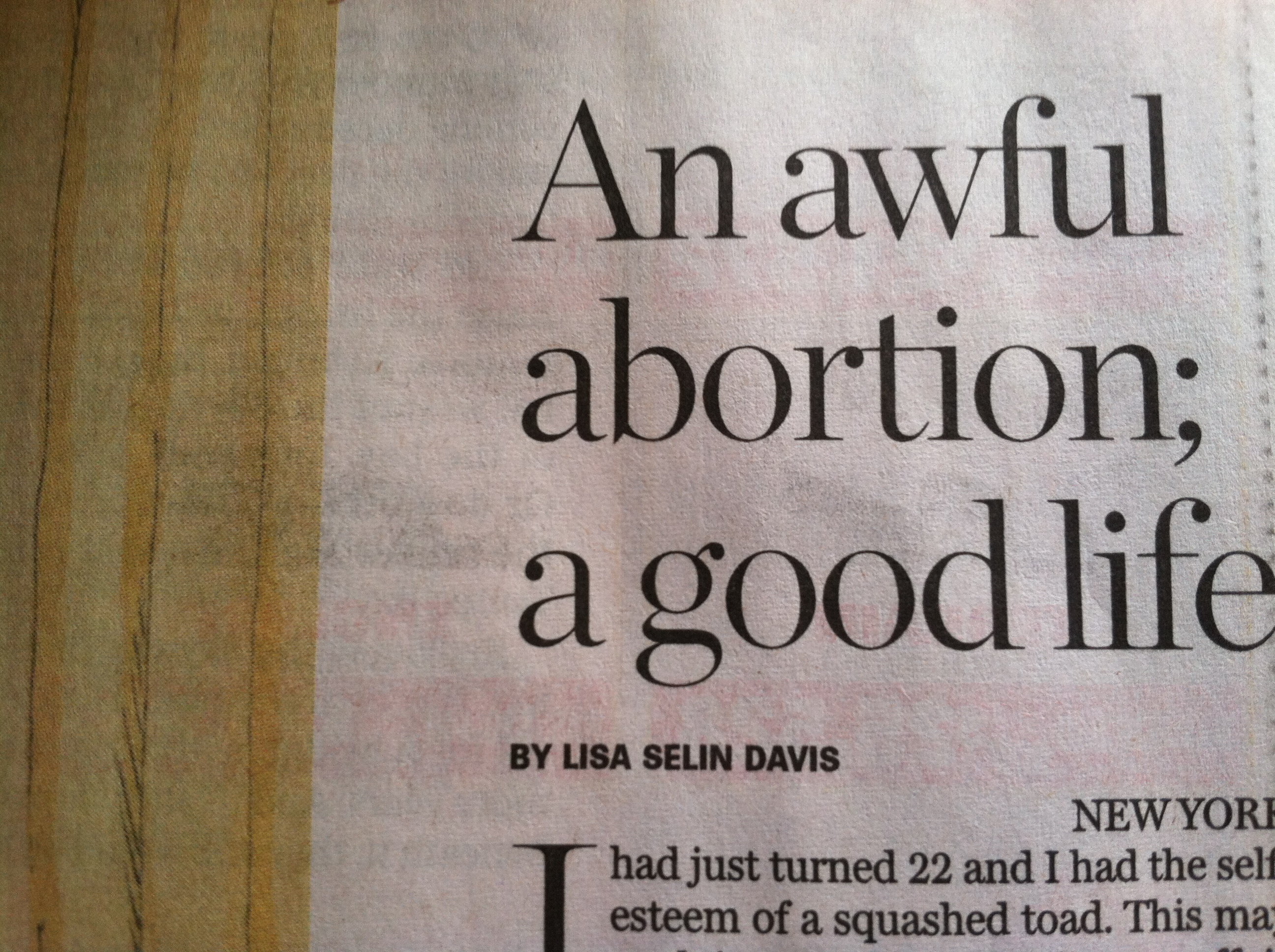 When Lisa Selin Davis told a cabdriver she was going to have an abortion, he pulled the car over on the Brooklyn Bridge in a blizzard. He begged her not to do it. Davis, then a 22-year-old aspiring filmmaker, had conceived the child with a married man she met at a film shoot. But she “didn’t want that baby, with that man,” she wrote in an essay that printed in the Perspective section of the Tampa Bay Times on Sunday.

The story is sad but bold. When Davis resisted the cabdriver’s appeal, he took her to the clinic to which she had asked him to take her, where after it was over, she woke up sobbing in pain and a paper gown. She was sure she would never be a mother. She was wrong. Fifteen years later, she wrote, she gave birth to a daughter and later, to another.  And, she added, “I want my daughters to have the option of safe and legal abortion, of course. I just don’t want them to have to use it.”

Davis’s is one of countless voices that roots for the right to choose to abort despite an admitted distaste for abortion. Abortion is regarded and protected by many as a “necessary” evil — a procedure to be avoided, but to be accessible for when other options are undesirable. Davis wants her daughters to have the right to choose to abort but she doesn’t want them ever to have to exercise it. In the essay, she doesn’t say what her daughters can do to avert ever feeling like they need to. Other voices like hers have made suggestions:

In the essay’s combox, a commenter wrote that abortion can be avoided by teaching “safe” sex, and making it easier for people to access contraception. In a recent tweet, fellow author Rachel Held Evans issued a reminder “that the single best way to reduce abortions is to make birth control more accessible and affordable.” These suggestions are problematic because they propose — rather ambitiously — that the path to the prevention of abortion can begin at sex.

Chastity acknowledges that “not using contraception” does not cause conception, and that sex at just the right time does. It acknowledges that consent alone doesn’t make sex safe, and condoms don’t make sex safe — that who you’re having sex with and when and why affects sex’s safety, too. Chastity acknowledges that the path to the prevention of abortion cannot start at sex, but must start at birth or adoption, when we’re chosen; that it must continue in our homes, where our parents are supposed to start our sexuality education; that the prevention of abortion does not depend on contraception, but on the the definition of sex (which — for chaste people — is a sacred, physical sign of the commitment spouses made to each other on the altar where they were married, ultimately designed to bond them and to make babies).

But chastity is widely dismissed. It is sometimes scoffed. It is a cure that a culture rejects because using a Band-Aid is easier, because we are desperate to prove we can have our cake and eat it, too.

Chastity accepts that we can’t.

Chastity requires us to respect “the unity of the person” by accepting and honoring a person’s fertility (CCC 2338). It “includes an apprenticeship in self-mastery which is a training in human freedom,” because we govern our passions and find peace or we are governed by them and unhappy (CCC 2339). Chastity “seeks to permeate the passions and appetites of the senses with reason” (CCC 2341). It “represents an eminently personal task (and) involves a cultural effort, for there is ‘an interdependence between personal betterment and the improvement of society'” (CCC 2344).[/callout]