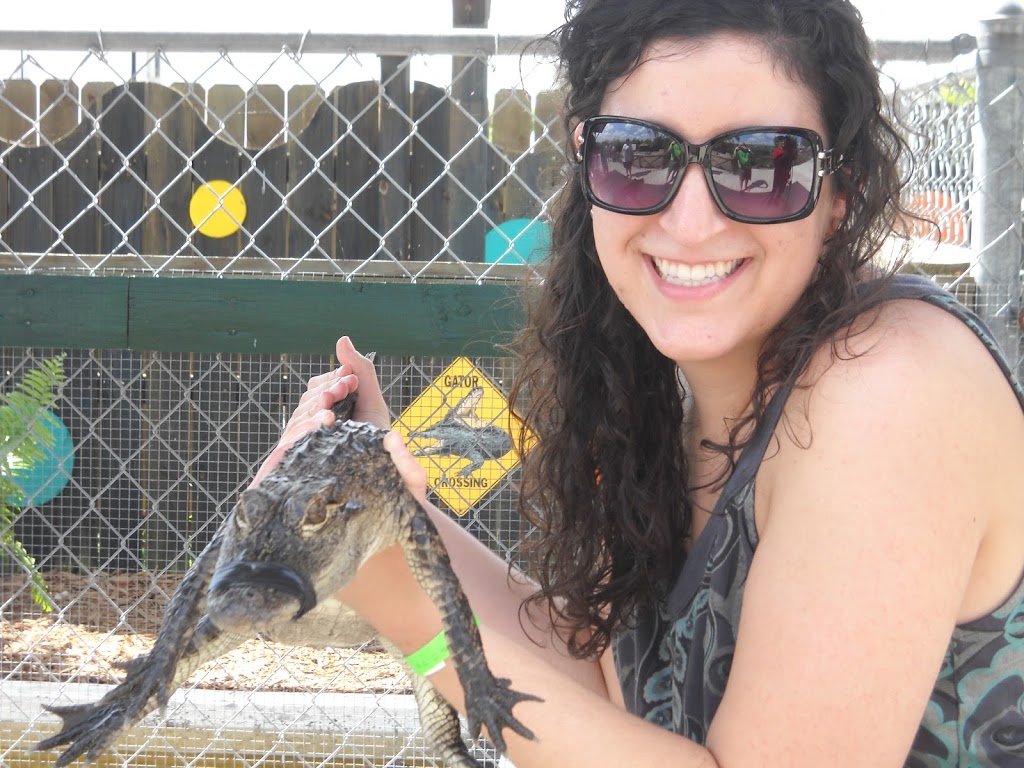 Question: What did the Everglades, Miami, the Bahamas and Key West have in common last week?

Like any financially irresponsible grad student, I followed my spring semester’s finals week with a week-long respite from reality. A tour via car and cruise ship of a bunch of places I hadn’t been. A much needed vacation.

Three of the Best Parts of the Trip

1. Holding a baby alligator. I loitered beside the baby alligator exhibit at an attraction in the Everglades until the guy and the girl in charge of it showed up. Upon expressing interest in holding one of the babies, the girl fetched a gator and the guy grabbed the tape (the kind he uses to tape a gator’s mouth shut). There was not, however, enough tape left on the roll, so the guy wandered away to retrieve more. Which is when, from within the grip of the girl who helps run the exhibit, the gator took a leak. So if there’d been enough tape left on the roll at the start, the following would be a picture of me, standing in a puddle of gator pee. Instead, thank God, this picture did not come with urine:

2. The snapper. In Nassau, I ate at Sharkeez, where I asked our server for what she recommends of the restaurant’s specials of the day. She, in turn, asked if I wanted something Bahamian. Heck yes, I said, so she recommended the snapper. Only an hour or two earlier, from my underwater seat in a glass bottom boat, I’d listened to our tour guide gush over snapper – grilled or fried – while snapper swam past my face. So naturally, I said, “Let’s go grilled snapper.” to my server. Like an hour later (Only barely an exaggeration. I think they may have gone outside to catch it.), she brought me my dish. And it turned out to be the best fish I have ever eaten in my life. Delightful. Even if it had a face.

3. St. Francis on the Beach. One of my favorite parts about being Catholic is the fact that no matter where  I am in the world, I can a) find a Roman Catholic church, b) go to mass at said church and c) the mass will be exactly the same there as it is at every other Catholic church in the world that day. Same readings, same prayers, same order, same Eucharist. And so it is familiarity in an otherwise unfamiliar place. A home away from home. So on the Sunday of my trip, I went to mass at St. Francis de Sales, a.k.a. St. Francis on the Beach, in Miami Beach. Great to have a home away from home, and for this one to be named after one of my favorite saints. 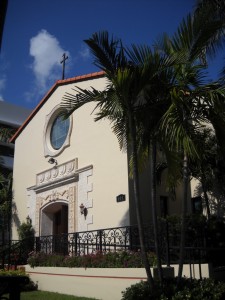 Honorable mentions: South Beach cab drivers, the roosters in Key West, the obligatory stop at the southernmost point in the continental US in Key West, pizza available 24/7 on the ship, running up a down escalator and the alarm clock incident. (Stay tuned to the true story series for explanations of the last two on this list.)

Three of the Worst Parts of the Trip:


1. Popular beach attire. It is perhaps special to South Beach for women to wear thong bikini bottoms (or otherwise not enough clothes) while they’re swimming and sunning, since never have I ever seen so much butt on a trip to the beach. (And I’m a big Florida gulf coast beach goer.) There is something alarming and sad about a culture in which it is not considered inappropriate to walk hand in hand with your three-year-old child while you rub sunblock into your exposed butt cheeks with your other hand.


2. Sunburn. I love a good tan as much as the next girl who loves a good tan, but on a raft in the water at Coco Cay (Royal Caribbean’s private island), I lost track of time and (as a result) a couple of layers of skin. The burn has since turned to tan, however, and I pledge to reapply sunscreen frequently the next time(s) I’m in the sun.


3. Vertigo. The cruise ended Friday. It is now Tuesday. And I still feel like I am on a ship.


Honorable mentions: Running up a down escalator, Royal Caribbean’s lack of a dessert comparable to Carnival’s Warm Chocolate Melting Cake.