I recently met God the Father. On June 11, I was in the back yard when he showed up and spoke. It isn’t as important that I share what he said as it is that I share how I felt when he said it: like his daughter.

For the first time in my entire life (I’m 31), God felt like a dad. An available one who delights in surprising me, who pays attention to me, who actually wants to do stuff with me, like sit in back yards.

This has wrecked me.

I didn’t expect it. I always had connected primarily with Christ and secondarily with the Spirit, but I didn’t know what I didn’t know — to borrow a quote from the book Abba’s Heart by Neal Lozano, “that Jesus and the Holy Spirit were ultimately leading me to the Father.”

Now that I’m closer to him, I can see what I couldn’t before: how short I’ve sold his goodness.

That stretches me. It challenges me to trust in ways I’ve never. It takes me out of my comfort zone.

The experience reminds me of a scene in Home Alone. Kevin’s in the church while the choir rehearses and his neighbor, about whom rumors exist, approaches him. Kevin freezes, wary and scared, until his neighbor speaks: “Merry Christmas.”

It surprises Kevin. His neighbor, who he long has avoided, strikes him as safe. The face Kevin makes as he realizes it is the same face I make as I learn what the Father is like. 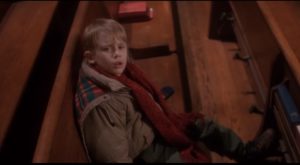 He’s present. He’s attentive. He likes me. He is active where I expected passivity. It surprises me.

And according to Lozano, “He will do whatever it takes to draw you to Him. … He is drawn to you and He seeks your loving response.” Which leaves me breathless.

He will do whatever it takes.

He seeks your loving response.

I didn’t. I didn’t know that all along, I’ve already had exactly what I’ve desired as a woman: to be pursued, to be wanted.

I didn’t know. Which is why the hardest thing I’ve had to do since June 11 is acknowledge my value.

This is new for me.

And I’ve tried to take.

I’ve handed myself to men who haven’t asked for me — I’d pursue for fear that he, whoever he was, wouldn’t; for fear that if I don’t, I won’t get what’s best for me.

As if God’s not as good as his son says he is. As if he his gifts aren’t good — as if he doesn’t delight in witnessing my response to them.

As if my value exists but is undetectable to others.

As if I have to prove that I’m likable, lovable, valuable.

My fight with this didn’t start because of low self-esteem (I like myself. A lot.). It started because I wasn’t aware of the Father’s esteem for me. Of his affection. Of his devotion.

I knew I was designed to respond to pursuit. And I knew I was likable, lovable, valuable. But I didn’t know if anyone else knew, and I wanted somebody to.

So for years, my actions spoke: “Look how lovable I am!” And as it turns out, the entire time, the Father was speaking to me.

“Look how loved you are.”

And he says it to you, too.