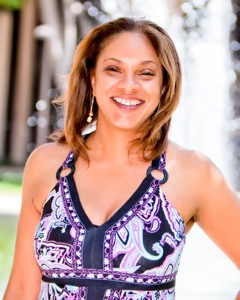 Late last year, I stood in front of a mic in a Tampa recording studio where, through headphones, I listened to Monique Matthews talk sex from a studio across the country.

She and I were two of three ladies invited as guests for a segment on NPR’s nationally syndicated Tell Me More to chat about our choices to save sex.

Matthews – screenwriter, director, and author of the book Sex Free: A (not so) Modern Approach to Dating and Relationships – is from New York City, lives in Los Angeles, and has worked in entertainment journalism and as managing editor for a national hip-hop publication.

Matthews, who hasn’t always practiced abstinence, is excited to celebrate her eighth year of celibacy this month. She recently graciously agreed to chat more with me about her choice to abstain from sex:

AS: Are you religious (and is your decision to practice abstinence at all rooted in your religious beliefs)?

MM: I am a practicing Christian who realizes that God’s commands are not to hurt, but to strengthen me, shield me from any harm, and enable me to enjoy life in abundance.

AS: How has life changed for you since making the decision to practice abstinence?

MM: Being sex free has impacted my life in many ways, big and small. One of the ways my sex free lifestyle has impacted me most is by strengthening my discernment skills. More specifically, eliminating sex allows me to see the depths of my attraction to someone. If it’s a largely sexual attraction, I know to let the potential interaction go. If it’s more than that, I do my best to be present and “show up” as the relationship unfolds.

Another way that being sex free has helped me is that it has increased my self confidence. I am valuable. Sharing my heart, time, and values with someone else is more than enough. If he doesn’t feel this way, then he’s missed out on a really great opportunity to know someone who’s fun, intelligent, resourceful, and willing to go to Hades and back for someone I love.

AS: When we were on NPR’s Tell Me More together, you talked about working in industries that aren’t conducive to saving sex, like screenwriting and entertainment journalism. Why exactly is it difficult to be “sex free” if a person is part of those industries?

MM: I am a screenwriter and director. Prior to that I was a magazine editor for a music magazine. As such I’ve worked primarily in areas where “sex sells.” Most popular music insists that having sex, often as much as possible, is not only fun and enjoyable, it is often a key to a woman’s equality. By this I mean that women are often considered equal to a man if they have casual sex without developing emotional attachments. Being risque is often associated with being sexy, as the listing of weekly Pop Top 20 charts will confirm. As a student in film school, many guest speakers would tell us the litmus test of deciding whether someone had “made it,” namely, “Women want to be like you and men want to f@#k you.” This does not mean that you have to sleep with every and anyone to be accepted; it suggests that one remember to use her sexuality as a tool, in addition to other talents, including writing, directing and producing.

AS: How do you manage to be “sex free” in your industry?

MM: Everything starts with a decision. Once you decide what you will and won’t do, you learn how to exist and thrive in any given setting.

AS: Regardless of the industries in which we work, we live in a culture in which being “sex-free” isn’t the norm. How can people who want to practice abstinence practice it regardless of what the world around them says?

MM: The first and most important reason is to decide what abstinence means for you. I believe sex, in its essence, is a fun, exciting and wonderful way to connect with another human being. If one chooses a sex-free lifestyle, the length of time is often based on that person. For some, particularly those guided by strong religious beliefs, it is until they are in a covenant relationship. For others who need healing from past relationships and/or may be in pursuit of a goal, it may be for a season until they can get a handle on whatever is preventing them from having fulfilling relationships and/or lives. It largely depends on the individual. Though I am a believer, I do not believe that the benefits of being sex free, which includes increased discernment, confidence, discipline, patience, and learning non-sexually based ways to show love, concern and consideration for a partner should be contained to the Christian community. Just as it’s widely agreed upon in society, whether one follows the Judeo-Christian tradition or not, that the Ten Commandments are a “good idea,” being sex free can work for anyone, regardless of religious affiliation or lack thereof.

AS: Is there anything I didn’t ask about, that you’d like to add about sex, abstinence, or relationships?

MM: One’s decision to become sex free, for whatever length of time one decides, is not easy, but it is worth it. Understand that tough days and nights will come. Do not run away from them nor deny them. Instead, allow them to strengthen you. As Romans 5: 3 – 4 encourages, “We can rejoice, too, when we run into problems and trials, for we know that they help us develop endurance. And endurance develops strength of character, and character strengthens our confident hope of salvation (NLT).”

Sex Free: A (no so) Modern Approach to Dating and Relationhips is available in paperback for $9.99 and as a digital download for $5.99 at Amazon.com. Special autographed paperbacks are available for $9.99 at sexfreebook.com.

Click here to listen to Matthews, Lisa Marziali, and me on NPR’s Tell Me More.