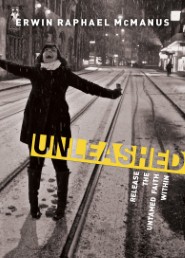 In my hot Florida garage this morning, I read the rest of Unleashed: Release the Untamed Faith Within by Erwin Raphael McManus. It is the sixteenth book I’ve read in full in 2012.

McManus is a resident alien in two ways, he wrote. One, he lives in Los Angeles and carries a green card (he’s from El Salvador). Two, he lives in the world and carries the Kingdom into it.

While I read his book, I was reminded of the time I stopped at a deli for a sandwich, in a really hungry rush. I paid and jumped in the car, hit the road and unwrapped what I’d eat while I drove. Sandwich in hand, surrounded by cars, I stuffed my face. Unabashed by my appetite, I neither simply consumed nor solely enjoyed my sandwich. I decimated it with a passion. I looked like a barbarian. And I didn’t care who looked at me at the red light, or what jokes they cracked about what they saw.

You don’t care about that stuff when you eat with reckless abandon.

The faith required to carry the Kingdom into the world is the untamed faith McManus invites us to unleash. Untamed faith requires a reckless abandon not unlike the one with which I ate my sandwich. It requires risk and trust. You get undignified and uncivilized. You’re a barbarian. And you don’t care who looks at you or what jokes they crack about what they see.

Two words, friends: worth it.

See below for some of my favorite excerpts. May they comfort or disturb you:

“Perhaps the tragedy of our time is that such an overwhelming number of us who declare Jesus as Lord have become domesticated – or, if you will, civilized.” -p. 12

“…’the Kingdom of God is near. Repent and believe the good news!’ (Mark 1:15) … So what is this good news? The refined and civilized version goes something like this: Jesus died and rose from the dead so that you can live a life of endless comfort, security, and indulgence. But really this is a bit too developed. Usually it’s more like this: if you’ll simply confess that you’re a sinner and believe in Jesus, you’ll be saved from the torment of eternal hellfire, then go to heaven when you die. Either case results in our domestication.” -p. 32

“The call of Jesus is far more barbaric than either of these. It is a call to live in the world as citizens of an entirely different kingdom. In its primitive state the good news could never be separated from the invitation of Jesus to ‘come, follow Me.’ He never lied about the danger or cost associated with becoming His follower. He told them up front, ‘I am sending you out like sheep among wolves. Therefore be as shrewd as snakes and as innocent as doves’ (Matthew 10:16). One danger of civilized faith is that we become so domesticated, we begin to live as shrewd as the dove. We are blind to the spiritual nature of life and the unseen reality in which we reside. Another danger is that we become as innocent as snakes. For far too long, sincere followers of Christ have had to live with the consequences of those who use religion to manipulate others and camouflage hypocrisy.” -p. 33

On what faith is not about:

“You were not created to be normal. God’s desire for you is not compliance or conformity.” -p. 82

On what happens when you unleash an untamed faith:

“You cannot meet the Creator of the universe and remain the same. … expect at least some minor disruption.” -p. 65-66.

“Once your life is in sync with the story of God, you become out of sync with any story that attempts to ignore or eliminate God. You are a stranger to them, an alien among them, a nomadic wanderer who, while refusing to be rooted in this life, seems to somehow enjoy this life the most.” -p. 93