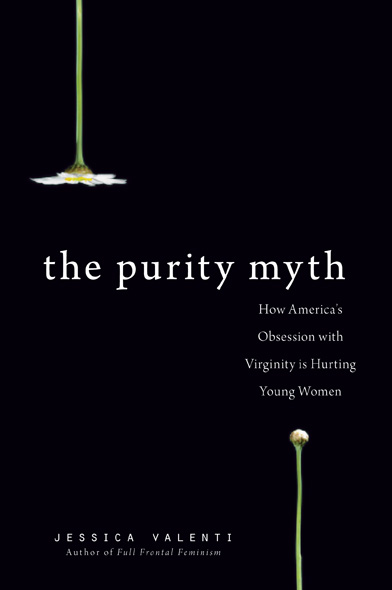 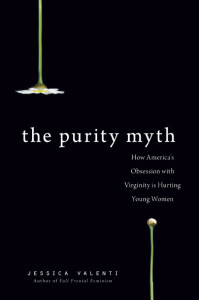 Proponents of The Purity Myth: How America’s Obsession with Virginity is Hurting Young Women would probably be surprised to know I don’t disagree with everything in it.

Albeit unlikely – based solely on the title – that I, a 26-year-old virgin and proponent of chastity (which involves abstinence until marriage) would enjoy reading the book, I did. And it is the seventeenth book I’ve read in full in 2012.

Written by feminist Jessica Valenti, the book aims to decry what she calls “the purity myth,” for shaming women for having sex before marriage, for promoting hierarchical relationships (in which men are authoritative and women are submissive) and for perpetuating the lies that men are uncontrollably sexual and women aren’t sexual at all.

Valenti is a fabulous writer, and the book is – in my opinion – an important and insightful one, def worth reading if you’re part of a lifestyle, church, school or ministry that involves calls to purity, abstinence or chastity (three terms which, as far as I’m concerned, should not be used interchangeably).

Which brings us to my first complaint. Throughout the book, Valenti doesn’t differentiate between purity, abstinence or chastity. Since she didn’t define them as separate, I’ll do it:

Purity, frankly, is my least favorite term of the three. This is what’s at the heart of purity pledges (which are usually business card-sized contracts teenagers sign when they pledge to remain virgins until marriage), purity balls (formal father/daughter dances in which daughters pledge their virginity to their dads and dads promise to be “keepers” of their daughters’ virginity until she’s married [Um…]) and purity rings (a ring a guy or girl wears, which symbolizes his or her decision to save sex for marriage. From what I hear, a girl’s father sometimes takes the ring from her during her wedding and symbolically gifts the groom with it [which is almost as awkward as purity balls]).

The way “purity” is used (in the church, at least) tends to imply that once a person has had sex, he or she is impure, or contaminated, or tainted, or one of several other dirty adjectives. My problem with this is several-fold: it’s judgmental, “pure” applies to you only until you first have sex (regardless of whether you’re married) (so you’re either impure at marriage, or impure shortly after. Lose/lose!) and it potentially creates and maintains the belief that sex is bad (a belief that, when deep seated, is not so easy to shake on the wedding night, when a couple is finally “allowed” to have sex. And a person who does something he or she believes is bad surely will experience a psychological toll, at least.).

Abstinence, on the other hand, is abstaining from sex (pretty straightforward).

Chastity is not the same as abstinence, but involves abstinence until marriage, and does not itself end at marriage. It is “… a decision to die to self and to selflessly love (or to die trying). People who practice it regard all people as intrinsically valuable, reject their objectification and uphold love as a choice in a culture that calls it a feeling.” (1) Of the three concepts, it’s the only one that’s a lifestyle and, in my opinion, the only one of significant depth. (2)


That Valenti neither defined or differentiated between purity, abstinence and chastity in the book posed problems, like misuses of one word or the others, and the promotion of misconceptions about them:

A. “In (one virginity-movement writer’s) worldview, women are naturally modest and chaste; if we’re sexual at all, it’s because of outside influences.” -page 49

Either the writer whose worldview Valenti references doesn’t understand chastity, or Valenti doesn’t understand it (and therefore misinterprets what the writer means when she says whatever she says). But chastity doesn’t imply asexuality. A person can be chaste simultaneously as he or she is a sexual being, and simultaneously as he or she has sex with his or her spouse.

B. “Whats the difference between venerating women for being f***able and putting them on a purity pedestal? In both cases, women’s worth is contingent upon their ability to please men and to shape their sexual identities around what men want.” -page 91

For the record, anybody who treats anybody else as though his or her value is not intrinsic is not practicing chastity.

…another example of Valenti’s misconception of chastity. Anything less chaste than hand-holding? The line implies the closer a couple gets to sex, the less chaste they’re being. That would only be true if chastity ended when a person first has sex. But chastity is never supposed to end. Sex itself totally can be chaste, if the people involved are practicing chastity.


My hunch is that what Valenti really means when she says “purity myth” and “virginity movement” is not “people who save sex for marriage,” but “complementarianism,” or, more specifically, the version of complementarianism that is, in reality, patriarchy.

“The virginity movement is seeking a return to traditional gender roles.” -page 39

People who are proponents of saving sex for marriage say there are emotional, physical, moral, spiritual and political consequences for premarital sex. … “All of these supposed penalties have multiple tie-ins with other virginity-movement rhetoric and organizing – and all with the same goal: to return to traditional gender roles.” -page 48

“After all, there’s a reason why the assumed goal for women in virginity-movement screeds is marriage and motherhood only: The movement believes that’s the only thing women are meant for.” -page 58

“There’s no hiding behind the rhetoric of empowerment (in the virginity movement) – the message is clear and direct: It’s up to men to control young women’s sexuality.” -page 66

“In the world of the virginity movement, ‘femininity’ is synonymous with submissiveness and girlishness.” -page 68

“In fact, they’re exactly what the purity myth would like women to be: passive, silent, and unable to articulate their desires.” -page 88

“It’s literally more important to the virginity movement that American women adhere to traditional gender and sex roles than that they are able to make a living wage.” -page 139

“And, perhaps most of all, it’s embedded in the myth of sexual purity, which is based on traditional gender roles in which men are ‘men,’ women are chaste, and a gender-based hierarchy is essential.” -page 168

“…it’s also mired in the belief that traditional masculinity is superior and its preservation is necessary.” -page 176

And I could go on. But if it is the proponents of chastity and abstinence before marriage who encourage all of the above (as Valenti suggests throughout the book), it’s curious that I – a proponent of both chastity and abstinence before marriage – do not believe God designed us to adhere to rigid, traditional gender roles (3); nor that women exist purely for men; nor that women are necessarily solely meant for marriage and motherhood; nor that men even have the right to control women’s sexuality (nor, for the record, that women are responsible for men’s!); nor that femininity is “submissiveness and girlishness;” nor that women should be passive, silent and unable to articulate their desires; nor that gender-based hierarchy is essential (or ever good, for that matter); nor that masculinity is superior; and nor that I exist to preserve it. And the same goes, so it happens, for most of my friends who are proponents of chastity and premarital abstinence, too.

I wholeheartedly agree with Valenti when she points out the damage done by the aforementioned beliefs. But I disagree with (and borderline resent) the implication that chastity and premarital abstinence necessarily involve adherence to those beliefs. In my experience, it is rare for a person both to practice chastity and hold to those beliefs (and more likely that the people who believe those things aim for purity or just practice abstinence).

Third, there is a whole host of random stuff I didn’t like and myths I’d like to clear up. Here are some excerpts, followed by commentary:

“Just look at the women we venerate for not having sex: pageant queens, … pop singers, … and religious women who ‘save themselves’ for marriage.” -page 24

This might come as a surprise to you, but I am not saving myself. I am saving sex. There is a big difference. I probably like the phrase “saving myself” less than I like how the church uses the word “purity.” For one, I know no legit Christian who thinks he or she can save him or herself, and for two, using “myself” and “sex” synonymously essentially objectifies the person.

“Sex-as-dirty and women-as-tainted messages are central to the virginity movement and are perpetuated most visibly in the most unfortunate of places – our schools.” -page 33

If this is true, I am not part of the virginity movement. FYI. And it’s after this quote that I’m compelled to point out that I lean far further in the direction of some sort of comprehensive sex education than I do in the direction of abstinence only.

“Pleasure is widely dismissed, if not denounced, in the virginity movement. When the purpose of sex is simply procreation, pleasure is simply gratuitous.” -page 43

If this is true, chastity is unrelated to the virginity movement. Because for people who practice chastity, sex is for procreation and unity, and it is supposed to be pleasurable.

“Abstinence-only education seeks to create a world where everyone is straight, women are relegated to the home, the only appropriate family is a nuclear one, reproductive choices are negated, and the only sex people have is for procreation.” -page 111

And finally, the book included a few gems:

“The real disservice to women here is that despite the fact that the plastic-surgery industry frames vaginal rejuvenation as “freeing” and benefiting women, the procedure’s real purpose is rarely for women’s pleasure – it’s almost always done for either men’s physical pleasure or aesthetic acceptance.” -page 74

Truth (the awful truth, I should say). And I think that goes for many (if not all) cosmetic surgeries, not limited to vaginal rejuvenation.

“In fact, women and femininity are so derided in American culture that it’s not uncommon to see men punished via feminization. A prison in South Carolina, for example, disciplines sexually active inmates by dressing them in pink. Another Arizona prison mandates that all inmates wear pink underwear. … A preschool in central Florida (reprimanded) boys by forcing them to wear dresses, and in 2001, a teen sued his former school for forcing him to cross-dress. … And it’s really women who end up being penalized because of these negative practices. This fear of women, this fear of being like women, is at the heart of most misogyny in the United States.” – page 170.

“Women cannot continue to be the markers by which men measure their manliness.” -page 181.

1. This quote comes from this recent sex essay of mine.

2. For a better feel for the depth of chastity, read up on it in the Catechism of the Catholic Church.

Click here to learn more about the Purity Myth.