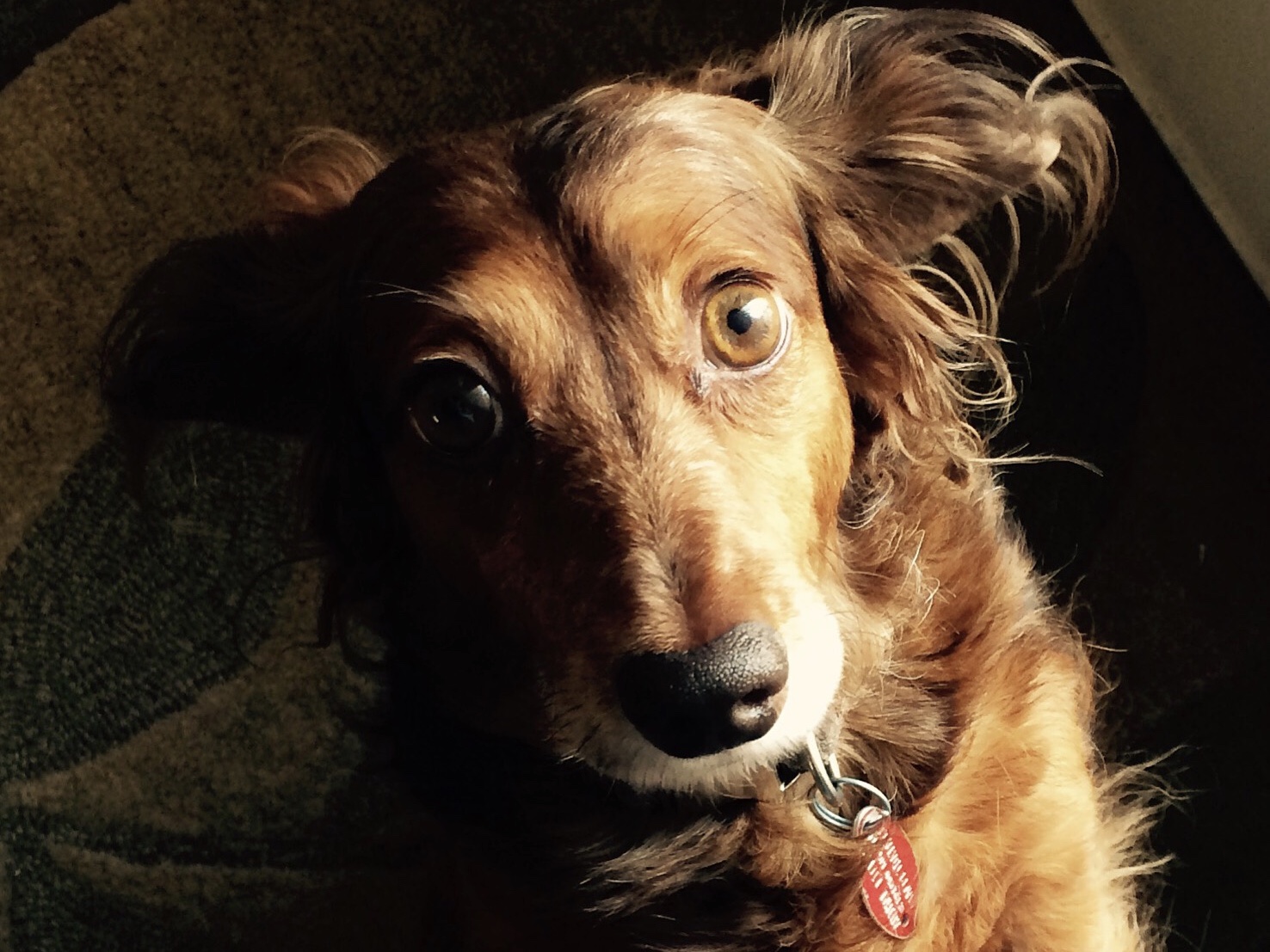 The waiting room was bright. I’d brought my laptop, so I picked a wicker loveseat near an outlet. I had a suddenly sick dog and a lot of work to do. Rudy sat beside me and silently kept an amber eye on every other pet. The vet had no appointments left that day (Dec. 27, a week ago as I write this) but she could see my dog between scheduled patients.

This made Rudy a “drop-off.” But he was sick. I didn’t want him also to be alone, in a foreign crate, in a building he hates. And I didn’t want to leave without him. So “I’m free until 3,” I said when I walked in at 9. The vet’s staff allowed me to stay. I left my laptop in its bag because Rudy moved to my lap. I didn’t feel like writing anyway.

Between patients, Dr. Pyle, the vet, met me in the waiting room. She could tell Rudy wasn’t well before she touched him—before she even saw the bruises. I held him up on his hind legs so she could see what we saw: a few discolored splotches on his belly, like what you’d see on the arms of a person who takes a blood thinner.

She checked his ears, his gums, his tongue. None looked like a dog’s should. The vet sent out a vet tech. “Can I borrow him?” she asked. I kissed Rudy and handed him to her. “We’re going to run some tests,” she said. I don’t know how long he was back there when Dr. Pyle returned to the waiting room to retrieve me.

I followed her through an unoccupied operating room into a room I only remember as blurry. I don’t retain a room’s walls or floor or decor when I learn what I learned in it. Rudy sat wide-eyed on the table. I stood beside him, in front of a wide-screen computer monitor. Dr. Pyle shut the light out and in pitch darkness, except for the screen, pointed at the X-ray on it. I saw what she saw, too: a giant mass that isn’t supposed to be there.

Anemia. Nearly no platelets. He’s bleeding inside. This kind of tumor, attached to his spleen, likes to start there and spread to the heart. And his heart didn’t look right. She’d need a radiologist to review the scan. That would take an hour. A few more tests and you can sit with him again, somebody said. I kissed my dog. I said, “I’m sorry. I’m sorry. I’m sorry,” to him, over and over. I also said, “I need to use the restroom.

I locked the door behind me and dropped my bag. I really did intend to use the bathroom. Instead, I cried. And I didn’t care if people could hear me. It’s just that my gut knew this wouldn’t end how I wanted it to and that meant I needed a minute. I had woken up as a woman concerned about her dog. I had to become a woman who could let him go.

I returned to the waiting room. Updated my parents. I don’t remember who brought Rudy to me. It was probably Dr. Pyle, who at some point sat beside me on the loveseat. The radiologist had sent his report. The tumor hadn’t spread to Rudy’s heart, but his heart was surrounded by fluid.

“So he’s bleeding internally, right now,” I said. “Yes,” she confirmed. “And does that mean he’s dying?” I quietly asked. “Yes,” she quietly answered. I said “OK.” I texted my parents again. We didn’t think we could handle this. We didn’t have a choice. My dad was on his way. My mom was with clients until 1:15. At lunchtime, a vet tech had a room ready for us.

Room 1 was blurry, too. Is surgery to remove the tumor an option? Technically. But not without drugs first, to produce hundreds of thousands more platelets plus a blood transfusion. His odds of surviving surgery then? Slim. A dog’s prognosis afterward? A few months, max, without chemo. And chemo? We wouldn’t do that to him. How long does he have, as is? Maybe hours, maybe a day.

So I did in Room 1 what you do the day you say goodbye to your dog. I thought about the day I met him.

July 30, I think, in 2010. A Friday night. I showed up at my house after dinner out with friends. I had learned, probably via phone, that my dad had come home with a dachshund. I tiptoed from the front door toward the kitchen. Turned the corner there and from the loveseat, he turned his head. We made eye contact.

A full-grown, longhaired, red brindle dachshund. I melted. I held him. He fell asleep, belly up, on my lap. This is why my best friend says boy dogs should wear pants. When he woke up, we let him explore. He spent most of that time howling at the front door. He wasn’t sure about us yet. At bedtime, my parents put him in a crate beside their bed. He cried for a few minutes before he slept silently through the night.

I woke up Saturday and remembered: there’s a dog here. I jumped out of bed and opened my bedroom door, which faces my parents’ door, clear across the house. I stood in my doorway. Rudy sat in theirs. He didn’t have a name yet. So I bent over, outstretched my arms, and with no hesitation, he ran straight to me.

That night, I wrote “Rudy” at the top of a sheet of paper, because the dog had a red nose and my family likes the movie, about Rudy Ruettiger. I wrote about a hundred more names under it. We narrowed the list of names to two: Rudy and Bosco. Rudy would be the most expressive and prettiest dog ever to join my family.

He had separation anxiety. He also had terrible depth perception. I still cringe (and laugh) when I recall the time he ran from the kitchen to the couch via the path under the coffee table—and jumped too soon. He wagged his tail the entire time I rubbed his head.

He caught lizards a lot and chased squirrels. He’s been to the Poconos and the Blue Ridge Mountains. He’s also been to Virginia Beach, with my parents, to visit me while I lived there. In the first days after I moved to Virginia, my mom said, Rudy started his day by waiting outside my bedroom door. Each morning, she’d open it for him. He’d walk in and look around before sitting at the center of the vacant room—where he’d sigh audibly.

He lost his mind and any sense of normalcy when I moved back in July 2019. But “I’m really glad I did,” I thought while he rested his head on my forearm in Room 1 at the vet’s office Friday.

My dad and I talked, to Rudy and each other. Cried. Waited for my mom. Rudy’s respiration changed. His gums and tongue went white. He didn’t have much time. “It’s ok to go night-night,” my dad told him. “But not until Mommy’s here,” I pleaded. When she arrived, the vet recapped fast. We could let him pass on his own, we learned, but internal bleeding can cause complications I’d consider inhumane. We made our decision.

While the vet prepared in another room, we took turns being nearest to Rudy. Touched his face and his nose and his feet. Cried and consoled him and each other. We told him we love him and that he’s a good boy. I said goodbye.

Dr. Pyle returned with the syringes. I had my hand on Rudy’s side when he died, around 2:15. The vet expressed her condolences, turned on the lightbox, and turned off the overhead lights. Room 1 was dark. We stayed a while with his body. My buddy’s little body. Which worked just fine until Dec. 26.

On Christmas Eve, he happily opened gifts under the tree (none of them his, by the way). On Christmas, he did his favorite thing: watched movies with his whole family on the couch. The next day, he clearly, and suddenly, didn’t feel well. But none of us would have predicted what had just happened.

We were in shock. I think we still are. I might’ve stayed there with him forever if someone presented it as an option. Instead, for a minute, I gently laid my body over his, on the table. You are never ready to never see a loved one’s body again. But around 3, I did exactly what I had set out not to do that day. I left without him.

Hard days and nights followed. We’re still in them, of course. But during one of them, I was driving when I realized: I forgot to say something to Rudy before he died. Yes, I forgot to say a thing to a dog.

Thank you for being our dog. This realization wrecked me for a second. It was too late. But almost immediately, I knew it was OK.

Because I could do what it isn’t too late to do: thank God for Rudy instead. And now, I thank Him every day.