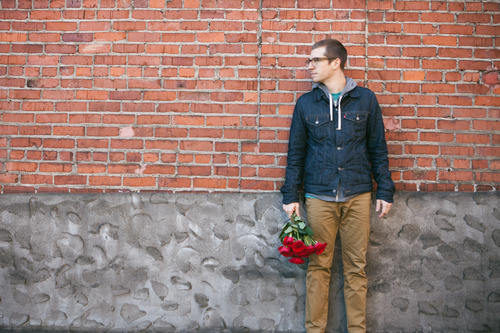 The A: The short version? READ MY BOOK. 😉 Keep reading for the long version:

When a woman is attracted to a man, the words of advice that come to mind are as follows (And — for the record — I’d say the same stuff to a guy):

While physical attraction, according to Edward Sri, “orients us toward another,” which is a step toward authentic love, physical attraction is not a substantial reason to pursue a relationship. Attraction is necessary, but not sufficient. It doesn’t obligate us to commit to a dating relationship, and it’s probably for the best that we don’t until we know there’s more that connects us.

And as for when a guy asks a girl on a date: Are you interested in him? Say yes! But if you already know you’re not, it’s ok — and probably for the best — to say no.

No woman is obligated to let a dude take her out. Even if he’s nice. Even if he’s a good person. Even if he loves Jesus. (Don’t worry, men: you aren’t obligated to ask a woman out, either.) If you aren’t excited about or attracted to him, odds are bad that that will change because he pays for your passion tea lemonade at Starbucks.

No husband or wife wants his or her spouse to look back and be able to say “I was so lukewarm about you while we dated!” When you know you aren’t into him, act accordingly. Turning a date down because you want to is a far fairer way to treat a man than accepting his invitation without actual interest.

[callout]Click here to read all the posts in the Q and A series. Would you like to submit a question? Leave it in the comments below, or send it to me via email.[/callout]