This post is part 3 in a sex and love series based on what I learned from my favorite parts of the brilliant book Love and Responsibility by Blessed Pope John Paul II. All quotes, unless otherwise noted or used for emphasis, come from the book. 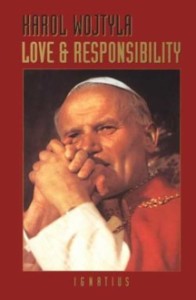 I have not forgotten the confirmation class at which a married couple taught us about sex.

“Sex is for babies and bonding,” they said.

…Which is a simple way to explain the purpose of sex – equal parts procreation and unity – to an awkwardly silent room full of high school freshmen.

But we grew up in a culture that disagrees. A culture that says sex is primarily for pleasure, that a baby is a side effect, and that if you don’t use contraception, you wind up like the Duggars.

But, says JP2, here’s what happens when you do:

1. “Neither in the man nor in the woman can affirmation of the value of the person be divorced from awareness and willing acceptance that he may become a father and she may become a mother.”

2. “If the possibility of parenthood is deliberately excluded from marital relations, the character of the relationship between the partners automatically changes. The change is away from unification in love and in the direction of mutual, or rather bilateral, ‘enjoyment’.”

When the purpose of sex is primarily pleasure, it is by default at least self-focused in part, i.e. it is at least in part about what I get out of it (and self-focusedness doesn’t foster unity). Some say this is a farce, that “my partner’s pleasure is more important to me than mine.” But if your pleasure is “bound up in” somebody else’s, when somebody else doesn’t experience pleasure, neither do you. Which is a problem when the purpose of sex is pleasure.

3. “Willing acceptance of parenthood serves to break down the reciprocal egoism – (or the egoism of one party at which the other connives) – behind which lurks the will to exploit the person.”

Contraception makes sex “safe.” Controlled. Predictable. (Albeit sometimes falsely). In the process, we are given permission to relinquish forethought. To act on any urge. To feel ok about having sex when we only want to have sex for self-focused reasons. Relinquishing control of fertility, on the other hand, requires us to acknowledge the magnitude of what we’re doing. To embrace the potential that this might make you a dad, and me a mom. In the process, we are necessarily perpetually pointed toward something other than self. We are given permission (and courage) to consider that sex is greater, and more powerful, than “it feels good.”