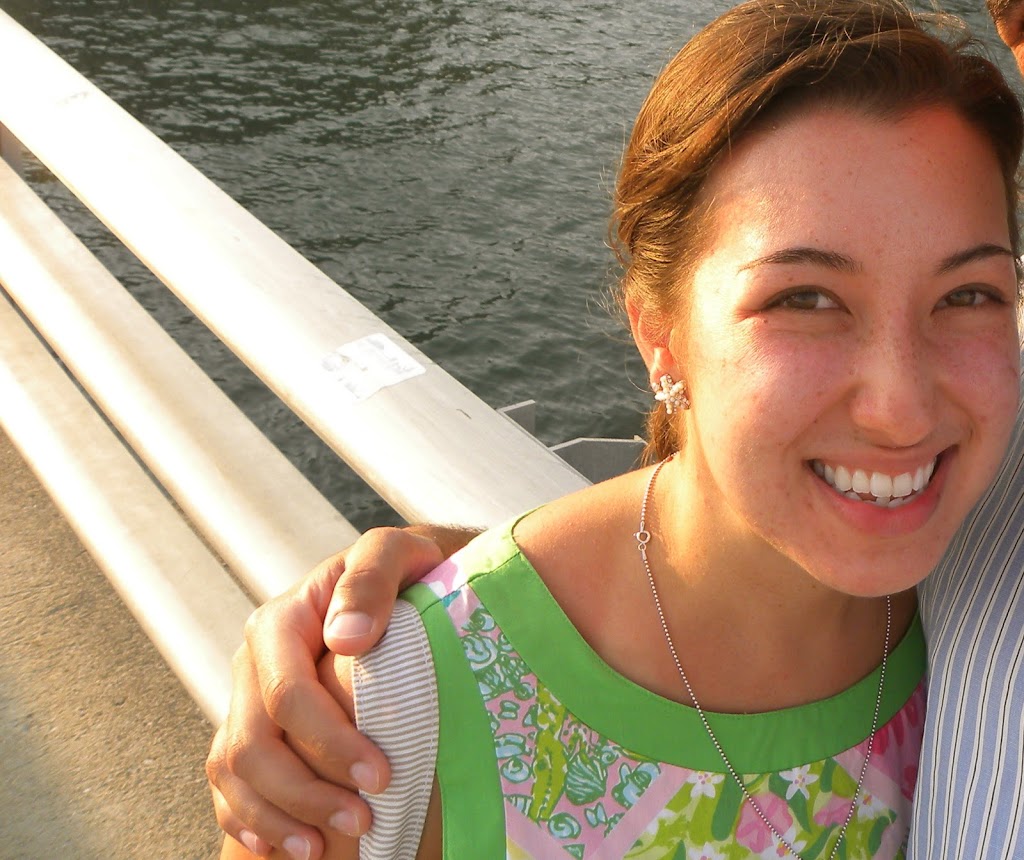 I bet not everyone gets to learn about contraception with the help of a Slip N’ Slide. Seriously. Born and raised Catholic, I learned somewhere along the way that the Church never permits artificial forms of birth control, but until I attended this particular gathering of my high school youth group, the one involving said slide, I’d thought birth control was one of those things, like Crocs and the Backstreet Boys, that wasn’t really taken seriously anymore.

I’ve discovered, as it turns out, that birth control totally is serious business. Love, I was told that night, is meant to be free, faithful, total, and fruitful (the slide was supposed to represent this, I think). It’s meant to be given without reserve, promised and sealed in fidelity, to hold back nothing, and to invite a man and woman to become creators of new life. It all made a lot of sense, especially when I discovered that the Catholic Church didn’t insist that every sexual act produce a baby.

So yes; my Catholic faith tells me that contraception is always inherently wrong. If you told me that it’s foolish to follow a bunch of rules just because the Catholic Church tells you to, I’d say you’re absolutely right. The amazing thing about the Church, I’ve learned, is that every time I’ve put a question of teaching to the test, there’s been a perfectly clear, logical answer that emphasizes one’s best good. Rules don’t exist to burden us (there’s a reason why you stop at a red light, for instance, or why your iPod manual tells you not to take your iPod swimming), but to let us live in the most fulfilling way.

The thing is, I don’t want to lead with my religion. I want to lead with who I am. My understanding has since deepened beyond a teenager’s somewhat blind obedience to her faith. The more I learned, the more convinced I became that birth control is one of the greatest inhibitors of romance, intimacy, and true freedom. I’ve come to see that biologically, practically, logically, and even romantically speaking, choosing not to bring contraceptives into a relationship is one of the absolute best ways to foster trust, honest communication, and authentic love. Who doesn’t long for that?

In the past few years, various friends and personal reading have led me to become a huge advocate for what I like to call the crunchy life. You know: coconut oil, kale, homemade cleaning products, and natural deodorant. I know I’m not the only one — in my observation, the benefits of things like green juice, organic meats, and neti pots are becoming commonplace on the pages of many women’s magazines.

It’s a puzzle to me, then, that with all the justified concerns we have about our well-being and environmental impact, so many of us seem to overlook a critical area of our lives: our reproductive health. Biologically, the birth control Pill and other hormonal contraceptives work by releasing large amounts of synthetic hormones, estrogen and progestin, that suppress ovulation and mimic the hormonal symptoms of pregnancy. In other words, they fool a woman’s body into a sort of state of constant pregnancy.

This, to me, couldn’t be further from natural. Consider, for instance, the fact that it’s normal to take medicine when you have a headache. It’s not normal when you don’t have a headache. In the same way, the Pill is marketed to “treat” a condition that doesn’t exist: it’s intended to actually prevent a woman’s body from functioning as it naturally does.

What’s more, the information packet for the Pill contains an extensive list of side effects that are directly related to taking it, ranging from weight gain, acne, migraines, and high blood pressure all the way to heart attack and increased chances of breast and cervical cancer. Ironically enough, the Pill often lowers a woman’s sex drive, the very thing she sought to liberate, as well. While packets are quick to point out that the Pill is merely “associated with” higher instances of serious conditions, and that they are rare, I still personally don’t find that the freedom to enjoy sex without pregnancy outweighs these risks.

I’m angered when I see how readily the Pill is pushed on women, largely in the name of profit. Friends have described taking birth control to me as feeling trapped in one’s own body, not feeling at all like oneself, and living in fear of what might happen to one’s complexion, weight, and future children, if one ceased to take it (you can read more anecdotal testaments here). We deserve so much more. The health-related shortcomings of birth control speak for themselves, but I think the logical case against contraception is just as convincing.

Free, faithful, total, and fruitful. It seems that even to a nonreligious individual, these four elements of love and sex are, at some point in a relationship, very desirable. I think most would agree that the body speaks a language, and that sex and love speak the same thing, whether one intends them to or not. They say, I want you, and all of you, forever. Isn’t that what we’re all longing to hear?

If one of these elements is missing, the body essentially speaks a lie. I want you, it says, but not all of you. It’s a conditional promise. When the fruitful aspect of sex is artificially eliminated, there’s a withholding of one’s fertility and the accompanying responsibility it bears.

That exact sense of unconditional love and responsibility is my biggest reason of all not to contracept. I met my husband Andrew four years ago, and when we became a couple, it didn’t take long for either of us to know we’d never go on another first date. Not only was he a handsome lover of words who’d hide notes around my apartment, he shared my take on birth control. During our engagement, we signed up for Natural Family Planning (NFP) courses to prepare for a contraceptive-free marriage.

Choosing to forego birth control in our marriage comes down to love. Karol Wojtyla, the man who became Pope John Paul II, wrote that the opposite of love is not hatred, but using another person. One need only look to the culture, I think, to see that hookups, friends with benefits, and cohabitation have left so many of us broken. We’re promised freedom, but are left instead with deep wounds. No one’s body or heart is meant to be used only for what it can offer sexually; it’s meant for love that sacrifices and heals.

Each of us is so much more than just a body, but in our humanness that can be easy to forget. Even in a loving marriage, there exists the possibility of desiring one’s spouse for self-gratifying purposes, rather than a desire to express love for the other. It’s a daily battle to let love prevail over lust.

I want my husband and I to have the best possible chances of winning–when birth control takes pregnancy off the table, I can only foresee a greater temptation to use one’s spouse, even unintentionally, to take sex for granted. Birth control, I think, could easily become a crutch to mask a lack of self-control for one another’s sake.

In our attempts to not take sex for granted, we’ve found NFP a powerful way to understand sex as good and beautiful without idolizing it. A far cry from the rhythm or calendar methods of old, NFP is a scientifically precise, observation-based method of simply tracking, rather than altering, the existing conditions of a woman’s body in order to determine periods of fertility and infertility throughout her cycle. When used correctly, NFP is as effective at postponing pregnancy as the Pill.

I’d be lying if I said it wasn’t hard not to giggle, at first, when we learned that cervical mucus was one of the observable signs of fertility. We discovered that planning to use NFP in the abstract and actually sitting in a classroom learning it, trying to pretend a couple wasn’t standing there talking about ovulation the way most people talk about the weather, are two completely different things. You get used to it.

It’s actually something I’m so thankful for–I’d venture that, between texting my husband about my mucus while I’m at work, filling in my chart together each night, and constantly discerning a prudent time to begin a family, we have a more goofy, more intimate, and more joyful sex life than we ever could with contraception. The responsibility of planning our family doesn’t just fall to me as I take a daily pill or replace a monthly patch; it’s shared by the both of us. The self-control required to abstain during times of fertility sets us free to truly give ourselves to one another.

Intimacy isn’t a right to be demanded. It’s the fruit of loving, willful submission. Sexual freedom, we’ve seen, doesn’t mean a total lack of responsibility for each other. It means a willful choice to love in a pure, self-giving way. “Freedom,” said John Paul II, “exists for the sake of love.” That is, when you love someone, you actually desire to place their happiness before your own. It’s a beautiful thing to behold.

Love that is free, faithful, total, and fruitful; love that sacrifices and unites. It’s nothing less than any of us deserve. I’d say that’s definitely worth a trip down the Slip ‘N Slide.

About the blogger: Born a hop, skip, and jump from the Chesapeake Bay, Stephanie Calis now resides in Appalachia, thanks to love. Her sweet husband Andrew teaches English there. She delights in bike rides, good books, puddle jumping, The Avett Brothers, hammocks, avocados, and Andrew’s many argyle sweaters. She is thirsty. Knowing so many others are, too, she spent a missionary year with Generation Life speaking to students about human dignity and authentic love. Her passion is telling young women they possess immense worth and that pure, sacrificial love is real; she thinks a truthful understanding of sex and love is medicine for an aching culture. Stephanie blogs about love and wedding planning at Captive the Heart.