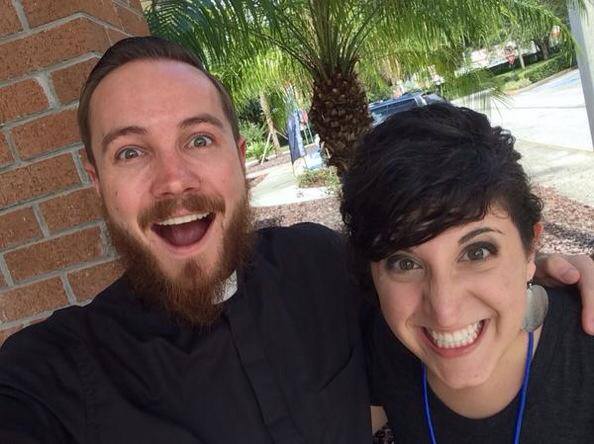 [callout]This post is part of a monthly series called PRIESTS & NUNS ARE COOL! in which I interview a priest or a nun about his or her vocation — and about how adults who haven’t discerned a vocation yet can discover their own. This edition features Fr. Victor, a parochial vicar at Nativity Catholic Church in Brandon, Fla.[/callout]

It’s worth noting that the first time I met Fr. Victor IRL was while we crossed paths at a Christian music fest at Disney’s Magic Kingdom. I said hi as he passed by, but I didn’t discover until later that he — who I saw not far from Space Mountain — is totally a priest I follow on Twitter!

Fr. Victor — who enjoys playing guitar, bass, piano and a bunch of other random stringed instruments and listening to music, watching movies, playing video games, and anything and everything related to baseball (especially the Tampa Bay Rays) — is gracious to discuss his vocation for this series, and to tell us how an adult who doesn’t know his or hers yet might discover it:

When you were a kid, what did you want to be when you grew up?

I wanted to be an artist, a musician, a scientist, a superspy — you know, normal stuff. As I got into high school, and even early on in college, I had a really strong desire to do something within the music industry, either as a musician or behind the scenes in production or something. I figured I’d get some sort of degree (I changed my major a lot in college) and then see what would happen. I don’t think I ever — not once — seriously considered being a priest when I was a kid. It wasn’t even something I was necessarily against; the thought just really wasn’t there.

When did you decide you would become a priest?

I like to jokingly say I decided to become a priest when my face kissed the marble in the Cathedral of St. Jude (which is true, in a way), but of course some sort of commitment was required of me before that. From early on in high school, I had always been pretty active within the church and when I was at the University of Central Florida as an undergrad, I started looking into this whole priesthood thing more seriously. At first it was to prove to a few priests that were bugging me about it that I was NOT called to be a priest, but look how that turned out. I never had one of those “lightning bolt” moments in my discernment — before or during seminary — when I knew beyond the shadow of a doubt that this is what God wanted for me. Every year that I took seriously the task of discerning what God wanted from my life, I had what I like to call a growth in certainty.

How did you know you were called to be a priest?

I entered seminary unsure if God was really calling me to be a priest or not, but pretty darn sure that he wanted me in the seminary for one reason or another. And looking back, it makes sense, since the seminary is an intense place of discernment, of listening to the Father’s voice. Through prayer, spiritual direction, conversations with friends, self-reflection, parish assignments, and so many other avenues of grace, I received a good amount of affirmation that I was on the path God the Father set before me. I never really heard God say “do this;” it was more like “keep going.”

The best part about being a priest is getting to preach, especially on Sundays. I love having the opportunity to take the readings and to interpret them for the congregation, trying to bring them alive for us today. I love it. It takes a lot of work to prepare them and a lot of energy to deliver them week after week (really, day after day), but it’s so worth it to bring God into peoples’ lives. The same Word of God who spoke all of creation into being, who spoke us into being, is still speaking to us today! It’s crazy awesome that I get to do what I’ve always wanted to do, to serve God’s people and share with them the Son of God who has made such a difference in my own life.

What should a young adult do who still isn’t sure what his or her vocation is?

If we understand the idea of “vocation” properly, then we can’t help but see it as an invitation from the Father, the One who created us for something. And we cannot figure out what this “something” is on our own, in a vacuum. We have to go to the Creator, spend time with Him, ask Him to show us — and then be patient. Our lives and our vocations aren’t problems that need to be solved, but mysteries that need to be lived out (credit for that idea goes to one of my seminary professors). And I think it can help take some pressure off of us when we go to the Father for this, rather than try to figure it out on our own: “Look, YOU created me for something, so show me what that is already!” But we also have to be willing to add: “and help me be ok with that, help me have the grace to respond to that calling, to persevere in that calling.” Basically, if you’re not sure what your vocation is (and who is, really?) — pray.

[callout]Connect with Fr. Victor: Follow him Twitter and Instagram! Fr. Victor’s bio: Fr. Victor was born and raised in Clearwater, Fla. After he graduated from Clearwater High School, he started his undergrad studies at the University of Central Florida but transferred to (and finished college at) St. John Vianney College Seminary in Miami. He completed his graduate level studies at St. Vincent de Paul Regional Seminary in Boynton Beach and was ordained a priest in May of 2012 at the Cathedral of St. Jude in St. Petersburg. He spent the first two years of his priesthood as the parochial vicar at St. John Vianney parish in St. Pete Beach. In the summer of 2014, he was transferred to Nativity in Brandon.[/callout]