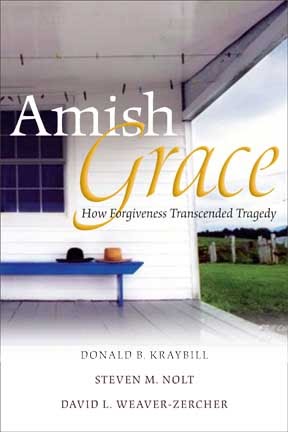 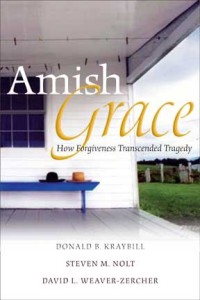 On the morning of Oct. 2, 2006, a 32-year-old man named Charles Carl Roberts IV backed a pickup truck up to the front of an Amish schoolhouse in Nickel Mines, Penn. Inside, the book says, students said the Lord’s Prayer and sang songs before their teacher taught them. Roberts, who the students likely recognized as a local, non-Amish milk truck driver, went in with a plan and a set of guns. Out of veangence toward God for a death in his family, he shot 10 students. Then he shot himself. He and five girls died.

News of the tragedy spread quickly. The world grieved with the Amish and wondered how anyone dared violently intrude on the peculiar world of a peaceful people. In the hours after “the Happening,” which is what the Amish people in Nickel Mines call the shooting, law enforcement officers investigated. Journalists reported. Five girls fought for life in hospitals. While it went on, some Amish people paid a visit to the house nearby where Roberts had lived, to have a word with his widow and parents.

They could have started a shouting match and threatened revenge, insulted the shooter’s name or spit in the faces of his family. They could have, but they didn’t. They expressed forgiveness for Roberts and sympathy for his family’s loss. A few days later, they — including parents of some of the girls who died — went to his funeral.

The authors of Amish Grace explored the Amish community’s countercultural ability to forgive. They dissected the mercy in effort to detect whether it’s possible or just an act. It, they discovered, is possible. And in Amish culture, it isn’t uncommon.

One of many stories that prove it in the book is about a 17-year-old, non-Amish boy in the 1990s. He, who lived in Lancaster County, Penn., sped up a hill on a quiet road in a fast car. When he came over the top of the hill, he came upon a horse and buggy, occupied by a young, newlywed Amish couple coming home from their honeymoon. The boy decided to pass the buggy rather than slam on his brakes. And as he began to barrel by it in the lane beside it, the buggy turned in front of him. When it and his car collided, the woman in the buggy died.

Days after the accident, the woman’s family asked the boy to come to their home for the woman’s wake. He did. What happened that day and afterward is unheard of almost anywhere else. The woman’s family, including her widower, hugged him and forgave him. They cried together. Then, they kept in touch. In each year after, they shared meals and conversation. The boy became a man who got married. When he did, members of the Amish family were guests at his wedding. The man helped his Amish friends when they needed it. The Amish helped fund a mission trip the man took with his wife. To this day, the families are close.

This, in the same United States where we hold a grudge against the guy in line in front of us if he pays for his food with a check. Where blood boils all day because the person who delivers our newspaper didn’t show up. Where “if only we knew where the guy lived” who put the ding in our driver’s side door. Where we berate and belittle servers in restaurants when what we get isn’t what we ordered.

Forgiveness, wrote the authors of Amish Grace, is “deeply woven into the fabric of Amish life” and “inspiring as it is, is not easily transferable to other people in other situations … How does one imitate a habit that’s embedded in a way of life anchored in a five-hundred-year history?”

I don’t have the answer. But forgiveness, once said Martin Luther King, Jr., is “not an occasional act. It is a permanent attitude.”

It is an attitude I want to see us adopt. To learn more about the book Amish Grace, click here.