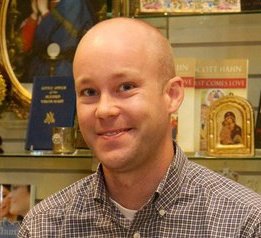 This edition features Matt Swaim, the host of the Son Rise Morning Show on EWTN Radio, and the author of The Eucharist and the Rosary and Prayer in the Digital Age. He resides with his family in Cincinnati.

MS: On the internet. On a punk rock social networking site. Back when Facebook was still The Facebook.

MS: December 18, 2004. Christmas weddings are underrated- they make it a lot easier to get everybody together when they’ve already got time off! Plus, you’re not sweating to death in a monkey suit.

MS: Never badmouth your spouse to other people. Other people usually know you better than they do your spouse, and will come to your defense rather than theirs. It creates an echo chamber of negativity, and can fuel the illusionary mentality that you’re always the one who’s in the right.

MS: Just because you’re the man of the house doesn’t mean you’re exempted from cooking, cleaning, or laundering things. Division of labor should be based on expertise and availability rather than gender. Takes a lot of stress out of the equation.

MS: Don’t argue when you’re hungry. Eat something first, and then discuss what’s bothering you.

AS: What’s one tip for readers who are single?

MS: Don’t wait until you’ve found the person who’s going to help you get to heaven before you start trying to be holy.

MS: Learn to cook new and interesting things. You’ll save a ton of money in the dating process, and a pizza made on the grill says “l love you” a whole lot more than a $5 hot-and-ready from Little Caesar’s.