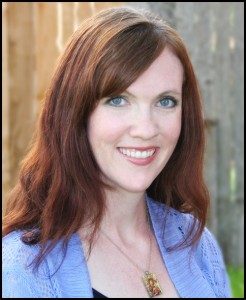 This edition features Jen Fulwiler, author of Something Other than God and blogger at conversiondiary.com.

She grew up atheist and converted to Catholicism, and has appeared on the TV shows Fox and Friends, Huffington Post Live, The Journey Home, Life on the Rock, and The Choices We Face.

Jen is mom to six kids under 10 and her favorite genres of music are Gregorian chant and gangsta rap. She is gracious to offer three lessons and two tips to us today:

JF: We worked at a high tech startup together. He was an Ivy League guy whom the management brought in to clean things up, and I assumed he was there to fire me. I would have never guessed that we would have started dating!

JF: We got married in 2003 in a completely secular ceremony — I wore a dark purple dress, we wrote our own vows, and we weren’t even technically married at the ceremony (we went to the Justice of the Peace to get the certificate from the state a few days before). Unfortunately we didn’t rehearse our self-styled ceremony, and it ended up lasting only seven minutes. That was kind of awkward since some folks had flown halfway across the world to be there.

JF: When your spouse does something that hurts your feelings, ask yourself if this is a trend, or if it’s a one-off incident. If it’s a trend, you should wait to address it with him until you can have sit-down conversation and calmly explain the damaging pattern that you see. If it’s an unusual occurrence, you should just let it go. Either way, there’s no need to blow up at him or her in the moment.

JF: Don’t buy into the secular messages that contraception and sterilization will make your life easier. Aside from the moral issues involved, on a practical level those choices bring in a whole host of new problems. (And I say this as someone who has a serious medical condition that is exacerbated by pregnancy, for whom Natural Family Planning is not always easy.)

JF: If your spouse says that something is hard for him or her, believe him or her. I think that one of the most damaging occurrences in a marriage is when one spouse is not pulling his or her weight in a certain area because it’s challenging, and the other spouse doesn’t think that his or her suffering is legitimate. Go easy on your partner. Assume he or she is doing his or her best. If you suspect that he or she is not, try to gently find the root cause and help address it. Don’t ever brush off your spouse’s struggles by saying, “You should be trying harder.”

JF: Throw away detailed lists. When I hear my single friends talk about the list of what they have to have in a spouse, I often cringe on their behalf, because I worry that they’re ruling out people unnecessarily. For example, I often hear women say that a man would have to be taller than they are. I am a couple of inches taller than my husband, and our marriage is absolutely amazing. It gives me chills to think that if I’d ruled him out based on a superficial criteria like height I could have missed out on marrying such an incredible guy.

JF: Ask your family’s input for what type of spouse you should be looking for. I have a few friends from other countries who have had arranged marriages, and it’s been amazing to see how well their marriages tend to work out, even though they barely knew one another before the wedding. I think the key is that their families — who know them better than anyone — carefully chose their spouses. Even if your parents and siblings don’t share your exact beliefs, they still know you in a way that others don’t, and could probably give you some good advice about the type of person with whom you’d be most likely to thrive.