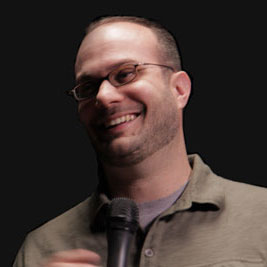 This edition of CHASTITY IS FOR MEN features my friend Everett Fritz, a chastity author, blogger and speaker.

Everett, who is a founding member and developer of YDisciple, a small group discipleship program for teens, is 31 and has been married for 9 years to his high school sweetheart.

He is gracious to help prove that chastity is for men.

She and I became close friends long before we started dating. As I saw guys in my high school try to sexualize and objectify her, I became very angry. She was the first girl I looked at for the person she was and not as an object to be objectified. The first time I ever heard God speak into my life was when he convicted me that I looked at women the same way that other guys in my high school would try and objectify my friend.

I became ashamed of my impurity and ultimately resolved to change. This led me to a long journey where I learned to surrender to God’s grace and ultimately made a commitment to live the virtue of chastity in my life. By the time my friend and I started dating, I was fully committed to chastity and saving sex for marriage.

We dated for over four years – all the way through college (two years long distance). If it were not for God being at the center of our life and chastity being a priority in our dating relationship, we would never have ended up married.

AS: What would you say now to somebody who struggles with the virtue of chastity?

EF: As difficult as the struggle may be, it is a necessary struggle if you want to experience the real love that you desire and long for. Pope St. John Paul II said, “Chastity is a difficult, long term matter; one must wait patiently for it to bear fruit, for the happiness of loving kindness which it must bring. But at the same time, chastity is the sure way to happiness.”

EF: Once I made the commitment to chastity, I really wasn’t all that concerned with what the culture was telling me. I practiced chastity because, at difficult as it was, I understood that saving sex for marriage was an act of love — and because I loved my future wife, I didn’t want to do something with her that was unloving.

Sex is a marital language, and it would have been selfish of me to make a physical, marital commitment with her before I was ready to make a spiritual and emotional marital commitment to her. I closely identified with chastity — and when something becomes part of your identity, you don’t quickly abandon it.

AS: What advice would you give to a single man who wants to save sex (or sex from now on) for marriage but doesn’t think it’s possible?

EF: If you feel like you are the only one saving yourself for marriage, there is probably some truth to your observation. While you are not the only one, there are far too few men in the world who will take up the battle and conquer their lust so that they can love the way that God intended them to love. There is a crisis in manhood in our world today, and we need more real men. Have courage! The world is in great need of men who will serve and defend women, rather than conquer women.