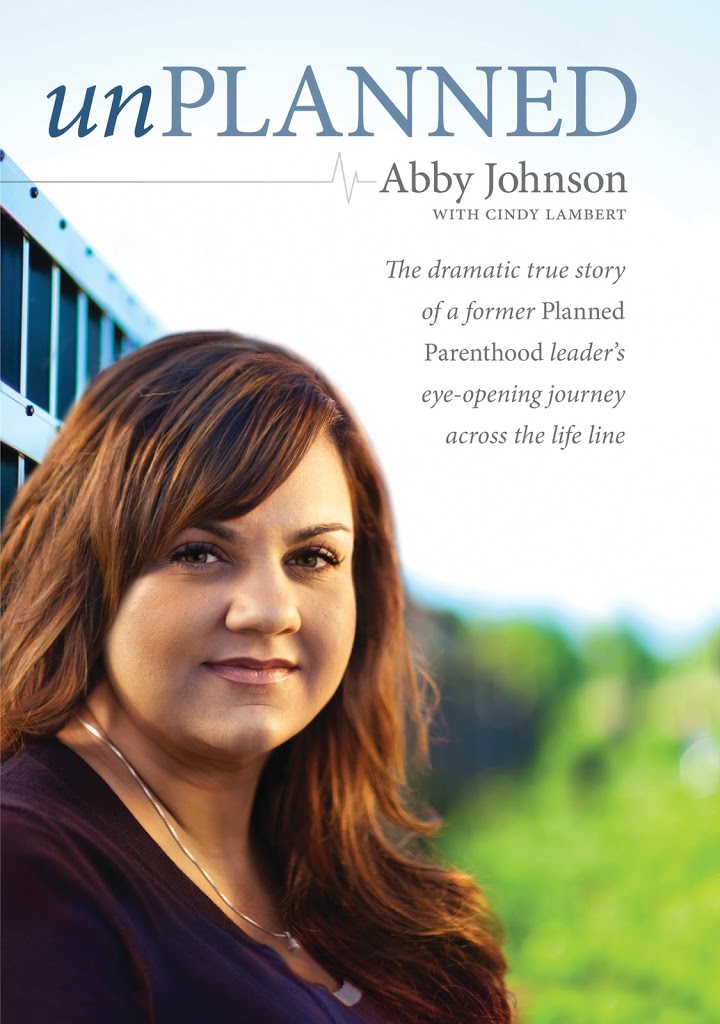 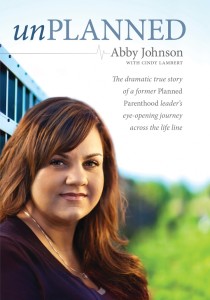 unPLANNED: The dramatic true story of a former Planned Parenthood leader’s eye-opening journey across the life line is — as of this afternoon — the eleventh book I’ve read in 2012.

The book (written with Cindy Lambert) is by and about Abby Johnson, a woman who worked for Planned Parenthood for years, until shortly after she assisted in an ultrasound-guided abortion. During the procedure, she held the ultrasound probe on the patient’s belly and watched the unborn baby react to the cannula (the tube used to remove a fetus from a uterus). Her life (and her values and career) changed instantly.

It says a lot about unPLANNED (and/or about my taste in books) that I read it in under 24 hours. I started it last night, slept with it in my hands and finished it today under the porch fan by the light of the afternoon sun. I found the book fabulous, as a Roman Catholic Christian, and as a woman, and as a writer, and as a mental health professional. Johnson shares her experience of becoming a Planned Parenthood volunteer and employee, of encountering the Coalition for Life (a pro-life organization a couple doors down from the Planned Parenthood where Johnson worked in Bryan, TX) and of discovering over time that the Coalition’s goals resonated more with her than Planned Parenthood’s did.

A talking point Johnson would use while employed by Planned Parenthood, to explain part of the organization’s purpose:

Um, I can think of at least one other way. (Just sayin’.) In the book, Johnson never said whether she is or isn’t still a proponent of the use of contraception to control fertility. The latter line in the above excerpt irks me. This is not solely because I am a proponent of chastity (which involves abstaining from sex before marriage), but because of all else contraception accomplishes. I haven’t discussed contraception much publicly, but for now is this: One of contraception’s purposes is to prevent the unprepared from becoming parents. It says “yay for fewer unfit parents!” loud enough that nobody hears the following over the noise: if you are unprepared to be a parent, maybe you are actually unprepared to be having sex.

What a great definition of integrity:

“…I particularly admired how his faith shaped his values and choices. I sensed a strength and consistency in his life—an integration of his beliefs with his practices…” -page 50

On being a churchgoer simultaneously as she worked for Planned Parenthood:

“On Sunday mornings, I felt like a spiritual misfit, surrounded by people in touch with God while I just felt left out in the cold. But I wanted to belong—really belong—among other Christians. I was careful to avoid conversations about where I worked.” -page 63

This passage is a great example of what Harriet Lerner wrote in The Dance of Fear, the book I blogged about yesterday: “The extent to which you hide something important about yourself or another family member is a good barometer of shame.”

A really good point (read it to the end):

“When it was clear I wasn’t getting anywhere, I turned to head back into the clinic. But I’d only taken a step or two when I turned back to [a pro-lifer who often prayed outside the clinic] and said, ‘You know—‘ He looked taken aback, as if he thought I was going to get nasty. But I just thought he should see our point of view. ‘There have always been people like us—like Planned Parenthood—defending the rights of women and human rights in general. Isn’t that what the emancipation movement was about in the 1800s, and then in the early 1900s, the suffrage movement? In World War II, people tried to stand up for the Jews. And now there are people like us, standing up for the reproductive rights of women, just as the suffrage movement stood up for their voting rights.’

He listened respectfully, and then he simply said, ‘Abby, you don’t have to justify your job to me.’

What? Justify my job? ‘I’m not justifying,’ I said. ‘I just want to explain—“

‘And you don’t have to explain what you’re doing either. The truth is, you just cited two instances of injustice—[regarding] the slaves and the Jews—that could only exist because a whole segment of our population was dehumanized. Society’s acceptance of that is what allowed injustice to continue. And that’s exactly what Planned Parenthood does to the unborn.’ -page 84

On the pro-choice friends she lost, and other people — the ones who prayed at the gates of the Planned Parenthood in Bryan, TX, who — even before Johnson quit her job — became her friends:

“But the process of seeing previously close friends turn away from me because we now disagreed about the crucial issue of abortion reminds me of the very different brand of friendship I’m also seeing in action these days. I’m thinking of people like Elizabeth, Marilisa, some friends from church and even college days—people who befriended me and stood by me for years even though they did not agree with what I did at Planned Parenthood, even though they do not believe in abortion. Those people modeled for me something far deeper, far stronger than situational friendship: they loved and accepted me even when I was (or am) doing something they found morally objectionable. They didn’t just talk about love—they put flesh on that concept.” -page 220

And I think we can all learn from that.