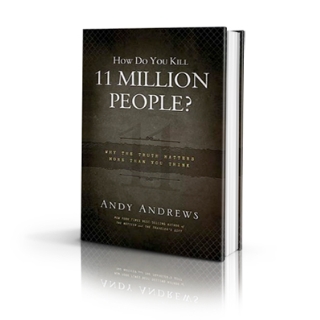 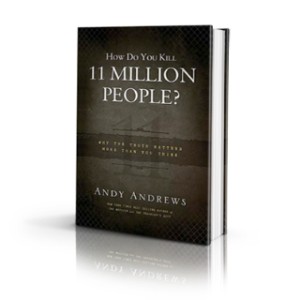 Several months ago, Michael Hyatt — a blogger of whom I’m a big fan — wrote a post about a book called How Do You Kill 11 Million People?: Why the Truth Matters More Than You Think by a guy named Andy Andrews. Based solely on what Hyatt wrote, I bought a copy of the book. I read it — my sixth book in 2012 — last night.

My reading it in one sitting, however, is no miracle. Around 80 pages with an average of, like, 14 words per page, anybody who can read can read it in an hour. The book is far more political in nature than I expected, but it’s timely, considering our country’s impending presidential election. Basically, Andrews uses the number of people killed by Nazis between the 1930s and 1940s to illustrate the power that can be attained and abused by people who are liars. He doesn’t take a political side, but points out that “we the people” have another kind of power — the kind enacted when we use what we learn about the past to prevent a repetition of history.

I think he makes a great point with it, but I think what he wrote requires some clarifying. It easily can be inferred that he’s ultimately blaming the fate of people who are deceived on the people themselves, when I think in reality, the entire process of being deceived is far more complex than that. I won’t put words in his mouth, but based on what he wrote, a person can infer that he’s calling anyone a fool who is deceived. But who’s the fool, really? Is it the person, or the people who raised him or her without modeling common sense or critical thought? And are those people the fools, or are the fools the people who raised them without modeling common sense or critical thought? And even then, are they fools, or are they products of another complex system composed of cultural and familial values and beliefs and habits that don’t happen to include all that much common sense and critical thought? It’s just not simple.

This, of course, is not to say I didn’t get anything out of the book. I did. Its point is applicable, really, to multiple parts of life (like mass media, mental health, relationships). A few of the excerpts I underlined are below:

“But in terms of why we do what we do, how we govern each other, what our society allows and why—very few of us intentionally connect the truth of the past with the realities of where we have ended up today.” -page 11

“You see, the danger to America is not a single politician with ill intent. Or even a group of them. The most dangerous thing any nation faces is a citizenry capable of trusting a liar to lead them. In the long run, it is much easier to undo the policies of crooked leadership than to restore common sense and wisdom to a deceived population willing to elect such a leader in the first place. Any country can survive having chosen a fool as their leader. But history has shown time and again that a nation of fools is surely doomed.” -page 42

“Why do the ages of our world’s greatest civilizations average around 200 years? Why do these civilizations all seem to follow the same identifiable sequence—from bondage to spiritual faith, from spiritual faith to courage, from courage to liberty, from liberty to abundance, from abundance to complacency, from complacency to apathy, from apathy to dependence, and finally from dependence back into bondage?” -page 46