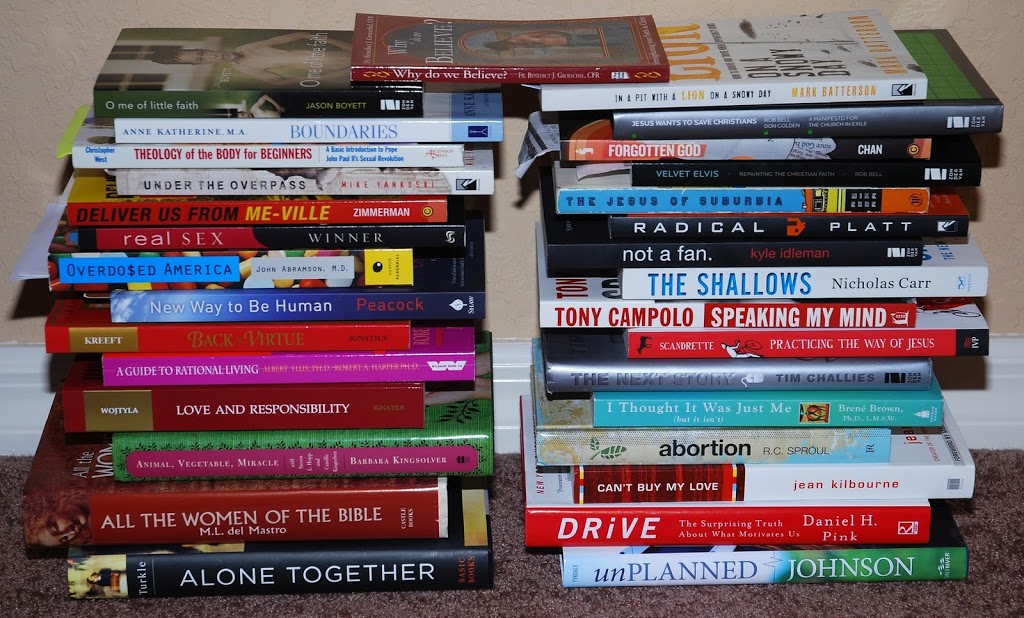 In 2011, I read a total of four books in full (which is shameful when compared to how many books I bought in 2011, but acceptable considering how busy I was in 2011 [This is what I tell myself. Go with it.]). I can’t close out the year without a) suggesting these four books if you’re looking for something to read and b) sharing some quotes from them that resonated with me.

Father Fiction: Chapters for a Fatherless Generation by Donald Miller

From a chapter called Dating:

From a chapter called Sex:

” [In this paragraph, Miller quotes himself in a talk he gave to a group of guys at a frat house.] ‘Let’s say you had a friend who was forty years old, and let’s say this guy played video games all night, slept around with ten different women, whoever he could get to have sex with him, drank all the time, partied it up, the whole bit. Would you respect that guy?’ The group shook their heads no, some of them voicing that they would think of him as a loser.


‘Because he’s forty,’ somebody spoke up.


‘What does that have to do with it? If somebody in your fraternity lives like this, he’s not a loser. Apparently, he is well-esteemed.’


The group said that it was different because the other guy is supposed to be mature. He’s supposed to have his life together.


‘Yeah, I think so,’ I began. ‘I think he is supposed to be mature, because he is forty. But we’ve kind of said something here, haven’t we? We’ve said that maturity doesn’t stay up all night playing video games and doesn’t sleep with ten women. Maturity practices self discipline and points a person’s character toward a noble aim. And I think, even in your early twenties, there is this need for guys like us to grow up, to sort of usher other boys into manhood, into commitment, into self-respect and an understanding that actions matter to more people than just ourselves.'”

Veneer: Living Deeply in a Surface Society by Timothy Willard and Jason Locy


From a chapter called Sawmill:

“Philosopher Peter Kreeft observes, ‘There is something radically wrong with a civilization in which millions devote their lives to pointless luxuries that do not even make them happy.'”


From a chapter called End Veneer:

“Every day, we encounter the spirit of this present age and, if we aren’t careful, it will shape the way we think, and subsequently the way we act. So we must take great care of our minds with regard to what we allow to shape our thinking. In both letters, to the Ephesians and to the Romans, Paul urges Christians to a different kind of mind, one shaped by God.”


The Gifts of Imperfection: Let Go of Who You Think You’re Supposed to Be and Embrace Who You Are by Brene Brown

From a chapter called Exploring the Power of Love, Belonging and Being Enough:

“One of the biggest surprises in this research was learning that fitting in and belonging are not the same thing, and, in fact, fitting in gets in the way of belonging. Fitting in is about assessing a situation and becoming who you need to be to be accepted. Belonging, on the other hand, doesn’t require us to change who we are; it requires us to be who we are.”


From a chapter called Cultivating Intuition and Trusting Faith:

“I love this line from theologian Richard Rohr: ‘My scientist friends have come up with things like principles of uncertainty and dark holes. They’re willing to live inside imagined hypotheses and theories. We love closure, resolution and clarity, while thinking that we are people of faith! How strange that the very word faith has come to mean its exact opposite.'”


From a chapter called Final Thoughts:

“… in this world, choosing authenticity … is an absolute act of resistance. Choosing to live and love with our whole hearts is an act of defiance. You’re going to confuse, piss off, and terrify lots of people — including yourself.”

The 5 Love Languages: the Secret to Love that Lasts by Gary Chapman