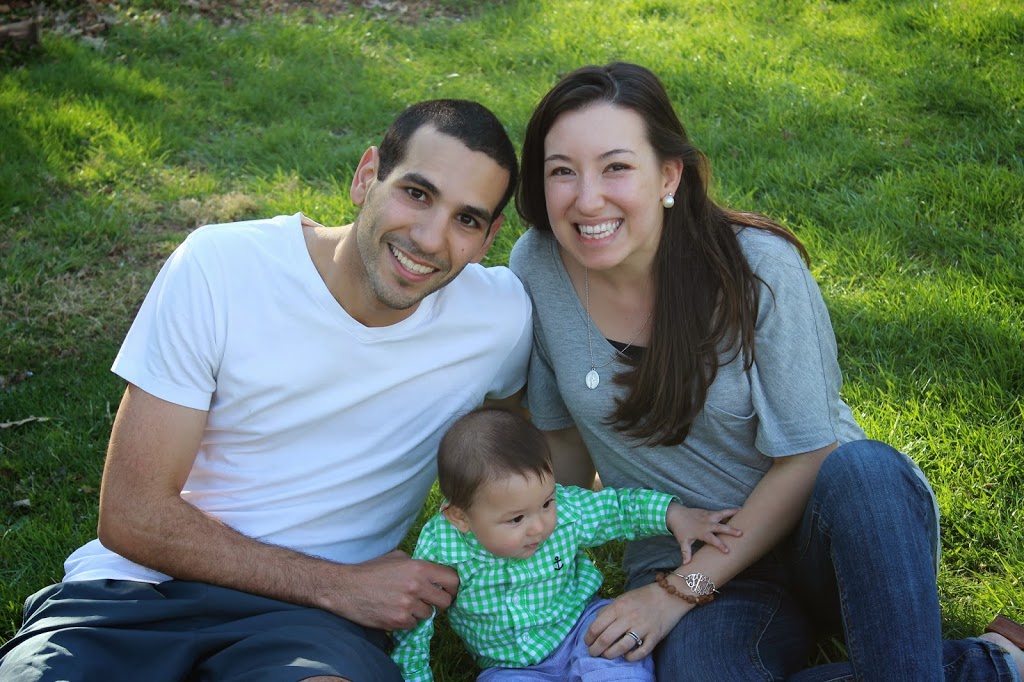 Stephanie and Andrew first bonded over hazelnut coffee and T.S. Eliot in college. They were married in July 2011 and are best of friends who have watched and rewatched many Wes Anderson movies, given talks on marriage and Natural Family Planning, eaten a lot of ice cream, and had a baby together.

They live with Aaron, the baby, near Washington, D.C. Grateful that they took the time to share some lessons and tips:

[callout]3 Lessons and 2 Tips is a series of interviews in which some of my favorite people (and probably some of yours) share three lessons they’ve learned by being married, plus two tips for single people. This special edition — 5 Lessons — features important communication lessons learned in a marriage, among others, from Stephanie Calis — who blogs at Captive the Heart — and her husband, Andrew.[/callout]

[featured-image link=”http://arleenspenceley.com/5-lessons-from…d-andrew-calis/” link_single=”null” single_newwindow=”false” alt=”5 Lessons from Stephanie and Andrew Calis” title=”5 Lessons from Stephanie and Andrew Calis.”]Andrew, Stephanie, and Aaron[/featured-image]
Stephanie and Andrew first bonded over hazelnut coffee and T.S. Eliot in college. They were married in July 2011 and are best of friends who have watched and rewatched many Wes Anderson movies, given talks on marriage and Natural Family Planning, eaten a lot of ice cream, and had a baby together. They live with Aaron, the baby, near Washington, D.C. Grateful that they took the time to share some lessons and tips:

AS: What’s the first lesson you’ve applied to marriage?

Stephanie: Don’t fight in public. Be the guardians of your relationship. I once dated a guy who was sort of, um, sensitive. He felt most loved by words of affirmation, which is perfectly legitimate, yet pride played a role in his feeling affirmed. Often, for instance, he didn’t just want for me to tell him nice things; he wanted others to notice whenever I told him nice things and insisted I do it within their earshot. He didn’t just want to hold hands; he wanted everyone to see us holding hands so we could declare our dating status. I felt insincere doing loving things only for appearances’ sake, and frustrated that he couldn’t accept my affirmation internally, rather than in front of an audience. This battle over compliments and validation became one of our most frequent fights, and more than once we found ourselves shooting death glares across the table and furiously whispering to each other (or texting each other) in the presence of our friends. Awkward to the max.

Looking back, my boyfriend and I could’ve handled our arguments way more maturely; namely, by handling them privately. In that case, “fighting in public” was pretty public, but I’ve since come to see that fighting in front of people can take more subtle forms, too, like those times when you need to make a decision together, at the bank or at the doctor’s, maybe, and are desperately trying to act cool and diplomatic in front of strangers when all you want to do is hash things out with your spouse. I’ve learned it’s okay to excuse yourself from the teller, the doctor, or the party to have a discussion alone, rather than talk around an issue for propriety’s sake or, worse, to just go at it in front of other people. Andrew and I try (and sometimes fail so hard) to make sure there are never any walls between us. There are plenty of those coming from the outside as it is, so why create them on the inside? Arguments aren’t necessarily bad, yet in the interest of protecting our relationship, we put a lot of effort into saving them for when we’re alone.

Andrew: Assume your spouse’s best intentions. Stephanie’s first memorable act of sabotage included a skillet and over-medium eggs. We were crashing at her parent’s house after a friend’s wedding and were both hungry. A little peevish from exhaustion (and made worse by hunger), we weren’t being our very best toward each other. The last straw, though, was when Stephanie intentionally gave me the worst skillet in town for my over-medium eggs. Did she want them to turn into a yolky, messy glob? That’s certainly what they became. With each attempted flip, my peevishness—and my assurance that this could not possibly have been accidental but was unmistakably an act of vicious egg-sabotage—grew. When I exploded, shortly after my once-runny yolks exploded, Steph looked at me, startled I was accusing her of trying to ruin my dinner. “Why would I do that?” she asked. “Even if we’re tired and mad, why would I want you to have a bad dinner? I love you and I want you to be happy.”

And that’s something I’ve had to remind myself. Assume the best intentions in the person you love. Always. Even when, as in the case of the spoiled eggs, I was convinced my wife was out to ruin my dinner. A married person, as Steph reminded me, loves her spouse more than anything. And how terrible, how presumptuous, to assume that she was trying to hurt me. It was a rejection of her love. There are still moments where I am tempted to explain to her what she is really doing, and how she really feels toward me, but I consciously try to make what I feel secondary to what I know: that Stephanie loves me to such an extraordinary degree and it’s my responsibility, even in the face of evidence that suggests otherwise, to trust her; to trust the person to whom, in my wedding vows, I entrusted my heart.

Andrew: Accept changes to your relationship, both internal and external, as a part of marriage. Marriage post-baby to us looks nothing like marriage pre-parenthood. Even when we have friends to babysit Aaron, it is a conscious effort not to talk about him, to wonder what he’s up to, to worry if he’s happy. At the same time, it’s hard sometimes not to compare our lives before he was born to our lives now: the lack of free time for work, leisure, each other, even a meal, can certainly feel burdensome. Our relationship, once mainly concerned with each other, became about our concerns for each other in the context of parenthood. Aaron is a part of our lives, a part of ourselves, and a part of our relationship. And while we sometimes blissfully remember what is was like during the early marital months, we also have come to see parenthood as an expansion rather than an interruption of our relationship.

Parenthood obviously isn’t the only change a couple experiences. Who we are now isn’t who we were when we met, or even who we were when we married. This is true financially, locationally, physically, emotionally, spiritually, and just about every other way. Rather than dwell in the past, we try to see challenges as new forms our relationship takes. We grow together, as a unified family. And we see our love growing along with us.

AS: How about a fourth lesson?

Stephanie: View sacrifice as a good and not a negative. Sacrifice is a verb. Constantly denying yourself, inconveniencing yourself, and going outside of yourself for another person hardly sounds easy, let alone romantic. And yet, when you think about it, devoting yourself to another so deeply that you would die for them, in any number of ways (I’m not just talking actual death, but things like doing the laundry when you don’t want to, or letting your spouse have the last piece of bacon), is the ultimate act of love. Saint John Paul II wrote that “freedom exists for the sake of love.” He meant that freedom is given to us not so we can just do whatever we want, but so we can choose what’s good. The idea is that with practice and virtue, you come to desire to sacrifice for love of the other; it becomes more than a duty. I think back to when Andrew and I were first married, and how much I hated doing dishes. Honestly, I still hate them, but I’ve tried to build a habit of viewing dishes, and other inconveniences to myself, as ways to love my husband and help him out.

AS: And a fifth lesson?

Stephanie: Even when you’re mad, don’t withhold your affection. I remember a really good conversation with my college roommate, where we talked about her parents’ long, happy, ten-kid marriage. She told me they’d promised to always hold hands when they were sorting out an argument, and it had borne so much fruit and forgiveness in their relationship.

A while later, this particular tip came back to me during Andrew’s and my first-ever fight. He’d agreed to join my friends and me for seeing Sherlock Holmes after getting a few things done at home. I don’t remember all the details anymore (This is good, see? No grudges here), but the end result was Andrew showing up very, very late and calling me nonstop as I tried to explain to him why I didn’t think it was a good idea for him to crash the movie after it had already started, which turned into trying to explain where I was sitting when he insisted. After finding my row in the dark and climbing over all my friends’ legs, Andrew plunked down next to me and whispered in my ear how sorry he was. Believe it or not, I’d known before we even started dating that he was the One, and I was determined not to do the dumb things I’d done in the past (see Lesson #1) this time around. But I was still mad. He took my hand, and even though I was annoyed at him for being late and embarrassed that he’d come into the movie so late, I had to admit how nice it felt. So I let him hold my hand. By the time Robert Downey, Jr. had taken down whatever villain is in that movie, I was feeling a lot calmer and ready to talk.

Studies show that physical touch can lower the body’s response to stress and encourage positive emotions. Believe me when I say I get that when you’re so mad at the other person you can’t see straight, being physically near them might be one of the last things you want to do. Something like grabbing a hand or nudging a foot, though, can go a long way. Deep, abiding love is still there, of course, beneath whatever unloving emotions you might be experiencing at the moment, and touch can be a powerful reminder and ease the untangling of the matter at hand. I’m ashamed to say that a few times, I’ve been so mad at Andrew that I’ve pulled away when he’s reached out to me during a fight or a tough time, and he’s told me how hurtful it is. Our bodies express who we are, and we’re responsible for expressing love and constancy.

[callout]Click here to read all the posts in this series.[/callout]