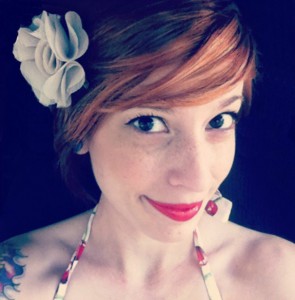 Haley is married to “Daniel of the big beard and the green thumb.” She’s also a homeschooling, bacon-eating, coffee-drinking southern girl with a flair for liturgical feasts and a penchant for bright red lipstick. I am super pumped she agreed to share three lessons and two tips with us today.

HS: Complete forgiveness is the only way to heal. I think we’re so ingrained with the idea that we need to stand up for ourselves that we have trouble really forgiving. You and your spouse will disappoint and hurt each other. That’s inevitable. So what will you do then? If you can’t forgive and move on, it will poison your marriage. Complete forgiveness will free you.

HS: Marriage is about dying to self. If you view marriage as a way for you to have your needs met by another person, you’re headed for trouble. You’re not competing for happiness, power, and satisfaction. You are a team. I remember after our first child was born, we were both so exhausted. We began playing the “who’s most exhausted” game in which nobody wins. It was miserable. We were both trying to hard to have our needs met instead of being a team. Now when we have a new baby in the house, we each put the other person’s needs before our own. I try to make sure Daniel gets enough sleep so that he can be alert at work. Daniel gets up in the early morning with the newborn and then makes the big kids’ breakfast so I can get some rest before the day gets going. We’re a team on this adventure instead of competing to put our own needs first. And it is a LOT more fun that way.

HS: Protect your time to just be together. During our third year of marriage we instituted a weekly date night and it improved our marriage so much. Even if we can’t go out to eat just the two of us (that only happens a couple of times a year), we either drop the big kids at grandma’s and just take the baby, or tuck the kids in bed a little early and cook a fancy dinner and drink red wine, just the two of us. The point is just being together. Reconnecting, talking, giving each other our full attention and having fun. A night devoted to enjoying each other’s company.

HS: My dad once told me, “Run toward Jesus as fast as you can and see who’s keeping up.” I think that’s probably the best advice.

HS: Find ways to serve others and make it a habit. If you’re called to marriage, the journey of dying to self will be a lot less painful if you’ve already started to practice self-giving.