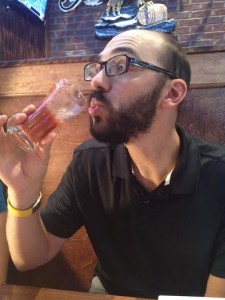 This edition of CHASTITY IS FOR MEN features James Blanchet, who works for the Department of Juvenile Justice by day and plays the drums, shoots guns and ages beer by night.

He loves mass with incense, dogs with soft ears and listening to jazz on vinyl. He lives in Panama City, Fla. with his wife, Alison. And Bobby Angel once complemented his beard.

James is gracious to help prove that chastity is for men:

AS: How old were you when you got married, and how old are you now?

JB: I was the ripe old age of 33 years when I joined my wonderful wife Alison in marriage. Right now I am 34 years old. Some quick math would show that we are indeed “newlyweds.”

JB: In my dating years, my biggest concern was not ever finding a girl who would understand my decision to save sex for marriage. Our current culture removes the mystery of sex and puts it center stage. Dating today seems to be a means to an end, and that end is usually some fashion of sexual behavior. Once a female knew I was saving sex for marriage, I became the nice guy who is “romantic” and “nice.” None of those relationships lasted for long.

AS: What would you say now to a dude who is saving sex, who has the same concern?

JB: I was a late bloomer with my theological foundations of virtue and sacrifice. I always knew that I was going to save sex for marriage, but never really understood the joys of sacrifice that surrounded that decision. My one regret, and therefore my advice to men who are saving sex for marriage, is in order to fully understand the role of sex within marriage, live a life of sacrifice and prayer as you look for that perfect “someone” to join you in the sacrament of marriage.

JB: I think it’s crucial to discern marriage as a true sacrament. Saint Ignatius of Loyola describes both the priesthood and marriage as unchangeable choices. While this is certainly true, it is also remarkable that Saint Ignatius reminds us how similar these two sacraments truly are. Is it good for the soul in seminary, in formation for the priesthood, to sneak away and pretend to “consecrate” bread and wine into the Body and Blood of Christ? How is sex before marriage any different? These behaviors put the soul in grave danger and separate us from what Saint Ignatius calls a means to the end result of knowing God and His salvation.

It is important for single Christian men to avoid being absorbed into our current culture of death. Wait, but aren’t we talking about sex? Yes, and living a virtuous life is the ultimate pro-life decision. Life should never be seen as a consequence or a burden. This applies to the elderly, the infirm, the imprisoned, and the unborn. We as faithful men should choose to save sex not because we want to avoid the consequences or burden of a child, but because we choose the sacrifice and virtue of welcoming life within marriage.

JB: My advice would be to practice prudence in all aspects of love, not just those aspects that might lead to a sexual encounter. For men, we live in a world of instant gratification. We are bombarded with visual and auditory stimulus all day long, right at our finger tips. “Saving” anything (not just sex) seems like a foreign concept in our culture. Practice prudence in daily life, and accept these sacrifices with joy and prayer.

Ok… I will give an example. Beer. Yes beer. I enjoy aging all types of beer. I have fine crafted ale that I’ve been aging for ten years. Do I want to drink it? Yes I do. I have been wanting to drink it for nine years! That being said, I accept the sacrifice and patience for the glorious day when I consume the most well-aged ale I have ever tried. Did I just compare sex to beer? Yes…because when you wait, they are both awesome.

Discernment plays a role here in looking for a man wrespects life and and the role the lives of men and women play in God’s master plan. Fall into the arms of the Saints that have gone before us and relish their suffering and ultimate glory. Our culture puts a strain on such life directions, but that just adds to the magnitude in which we must discern our sacramental life, and who we share that life with.